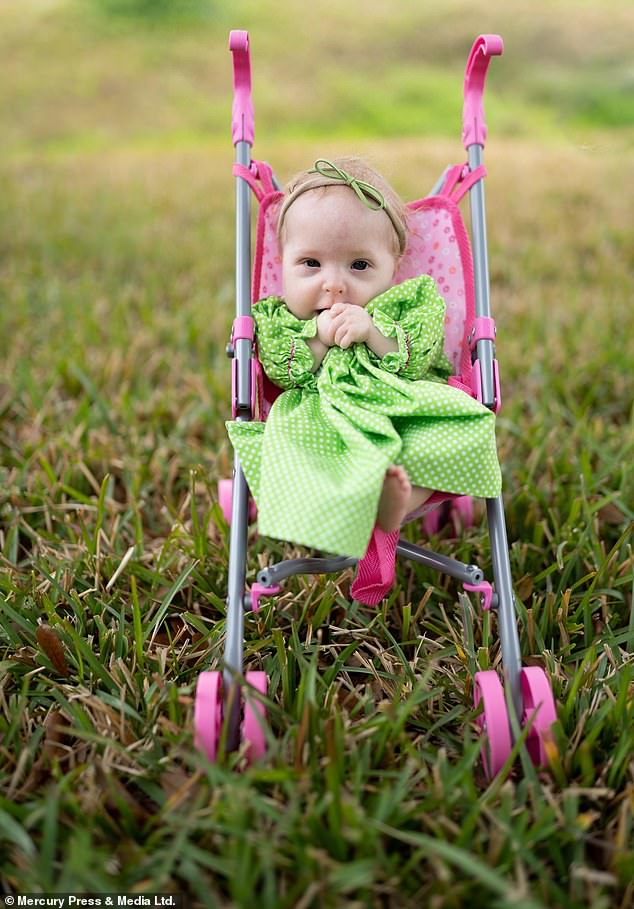 A two-year-old girl diagnosed with a rare form of dwarfism weighs just 7lbs and has to wear new born sized clothes.

The tot can only just fit into new born sized clothes and is smaller than a lot of her toys.

Her mother Emily Lee, 25,was first made aware that her baby wasn’t growing at the normal rate while she was pregnant and when Abigail was born via c-section, she weighed just 2lbs 9ounces.

The mother-of-two said: ‘Abigail grows two grams a day versus an ounce a day, so she’ll still be 7lbs at her next birthday.

Abigail Lee, two, from Louisiana, picture, was born with a rare form of dwarfism and will only grow to reach about 24 inches 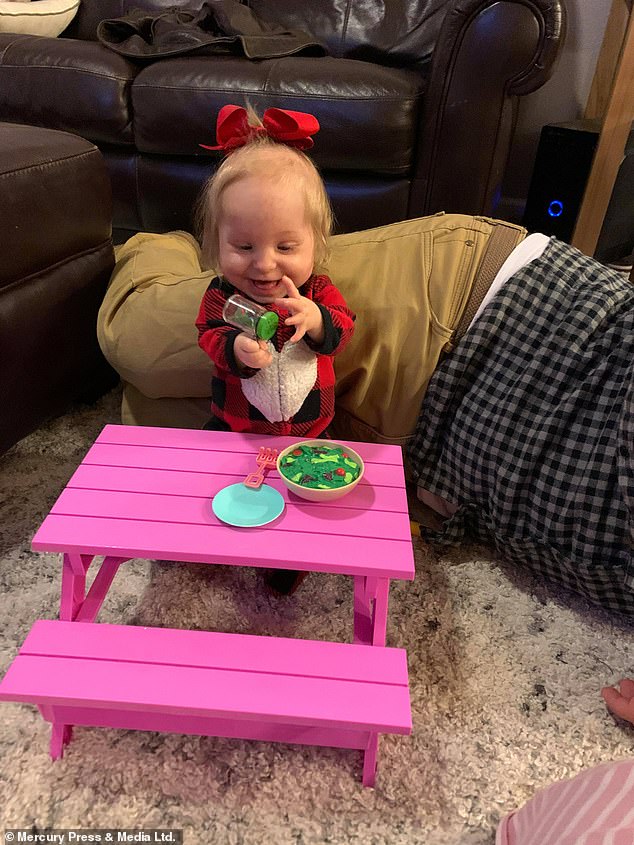 The tot is so small, she can only wear newborn clothes and she weight just 7 lbs. She can fit on her Barbie’s toy picnic table, pictured

‘She only just fits into newborn clothes. So I don’t know what we’ll do when she gets old enough to tell me that she doesn’t want to wear onesies anymore.

‘My best friend has a two-year-old and seeing them next to each other is mind- blowing.

‘Toys for kids her age are gigantic next to her. She has a table and chairs for her Barbies that she can sit in herself.

‘She eats like a normal kid, but there are a lot of things that a two-year-old would be doing that she can’t and it’s her size holding her back.’ 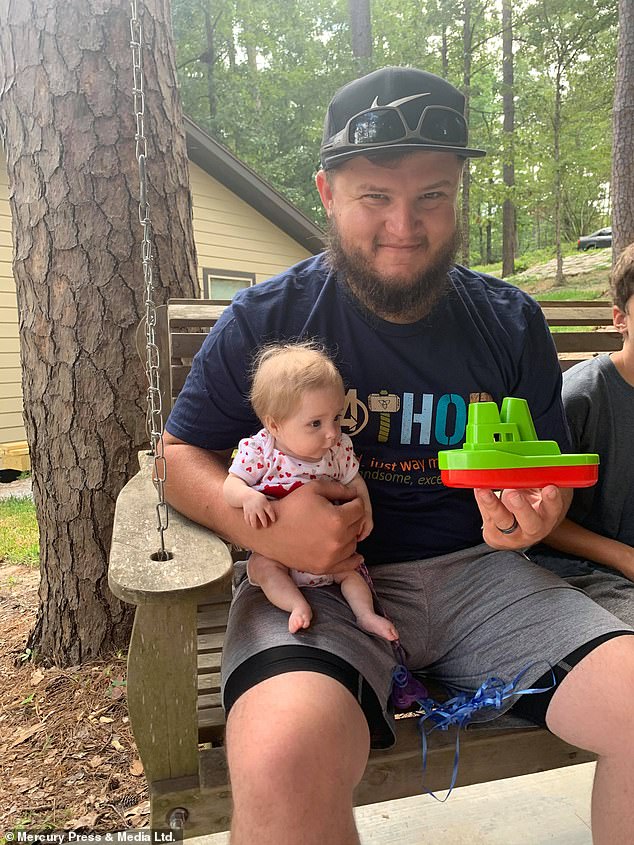 The toddler with her dad, Bryan. Her mother Emily said that children’s toys look enormous compared to Abigail (pictured next to a toy submarine)

What is Microcephalic Osteodysplastic Primordial Dwarfism Type II and how common is it?

The head of people born with the condition stop growing age 18 months, and so it develops into microcephaly (a disproportionally small head compared to the rest of the body).

The intellectual development of a person born with MOPD Type II is usually not impaired.

Thre are only 150 cases of this pathology recorded worldwide.

Life expectancy is generally decreased, but people living with MOPD Type II live into their 30s.

Abigail was diagnosed eight weeks after she was born when doctors noticed she hadn’t grown at all.

The toddler spent eight weeks in hospital before she was able to go home with her mother, dad Bryan, 25, and older sister Samantha, four, who doesn’t have the condition.

Emily said: ‘When I was pregnant, she was always three weeks behind in her development.

‘I had a c-section at 36 weeks and she went straight into intensive care.

‘She was doing everything normally, she was breathing and eating fine but she was tiny.

‘When she was diagnosed, we’d never heard of this type of dwarfism, so had absolutely no idea what it was was.

‘For months I struggled to find anyone who had been through the same and could help.

‘The day she was diagnosed, I just sat in my car in the hospital car park and cried for two hours because I didn’t know what I was doing. 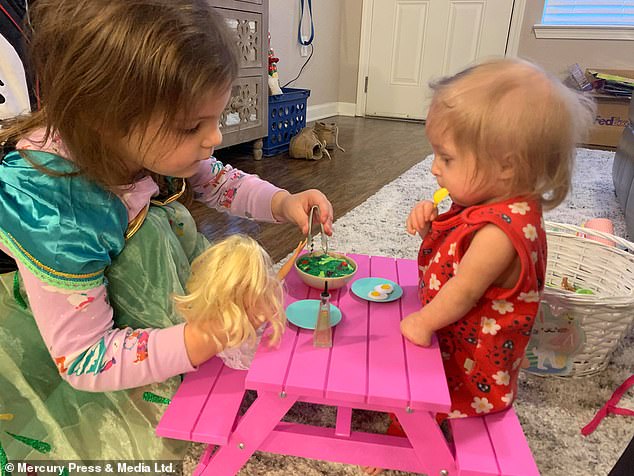 Emily said her protective older daughter Samantha, who is four, is a ‘rock’ and knows Abigail, right, needs extra help (pictured playing together) 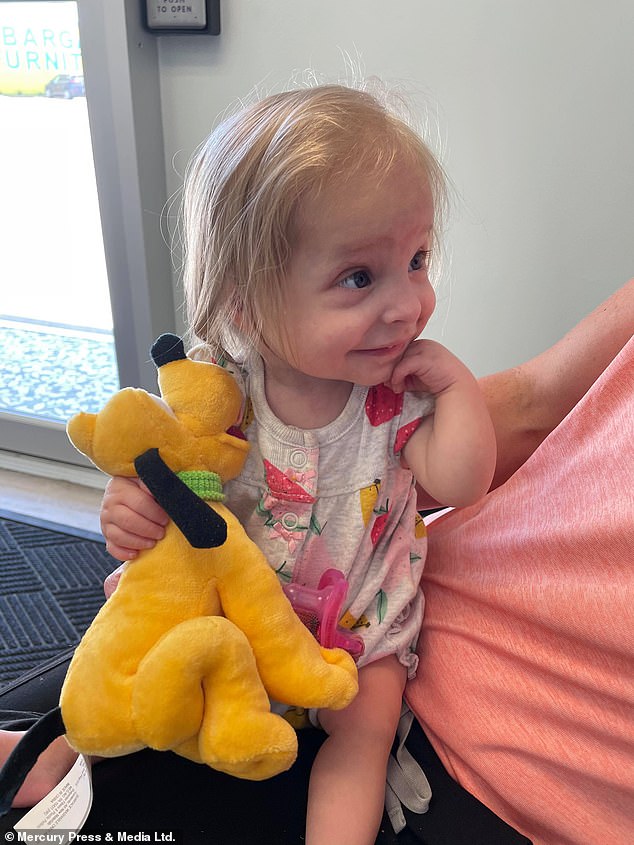 Abigail, pictured, is a healthy child and has the same appetite as a normal two-year-old, but her development was slowed down by her dwarfism, and she can’t walk yet 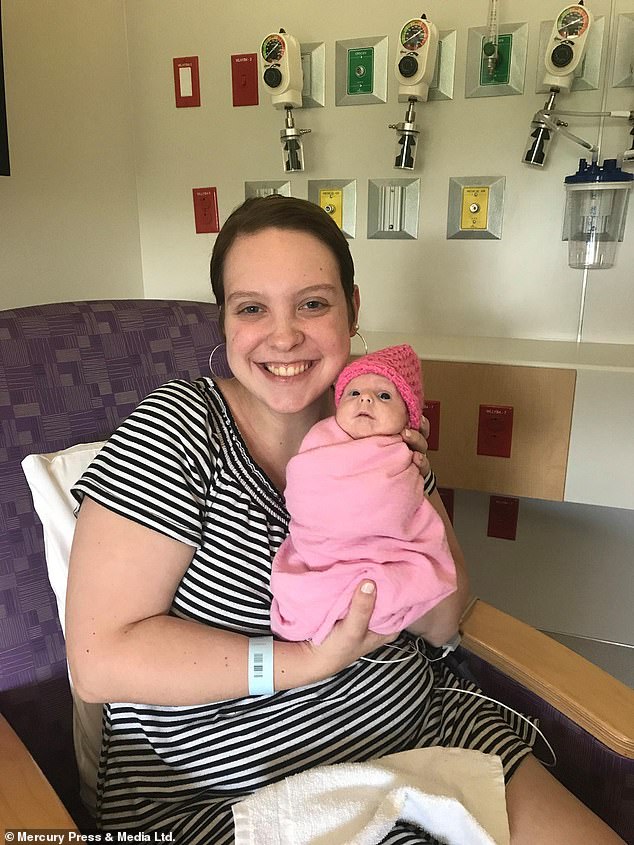 Emily, pictured with Abigail after her birth, said she cried after hearing her daughter’s diagnosis because she didn’t know what to do

‘She is healthy but she has complications because she was born with dislocated hips and she can’t walk but she crawls and she’s going to therapy.

‘She’s also got really bad eyesight so we’re having trouble finding glasses that fit her.

‘It’s hard to balance out a child with special needs and a child without because Samantha knows her sister needs more help.

‘Samantha is an absolute rock star, she gets involved in all of the therapy and she’s really protective.’ 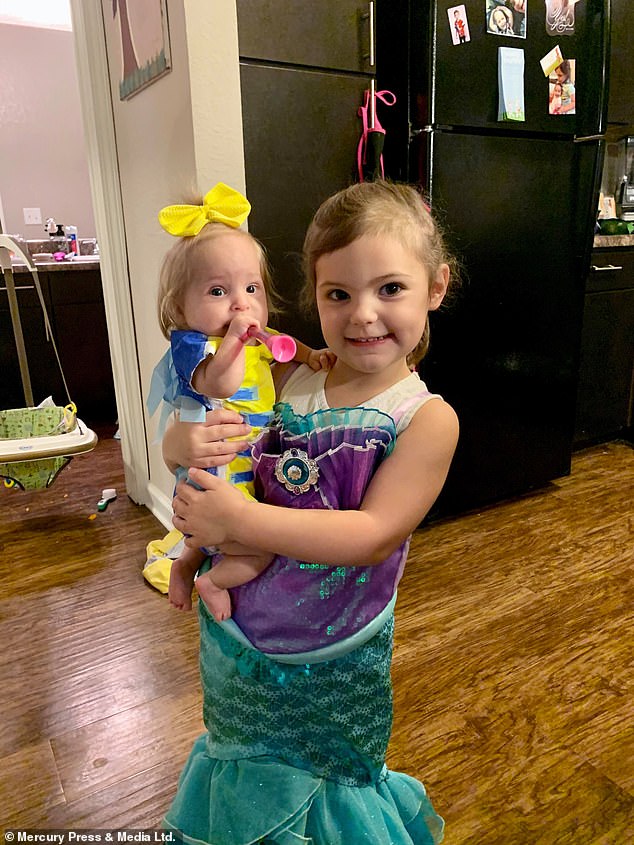 Pictured, Samantha and Abigail together. Abigail has bad eyesight due to her condition, and Emily and Bryan have struggled to find her glasses that fit 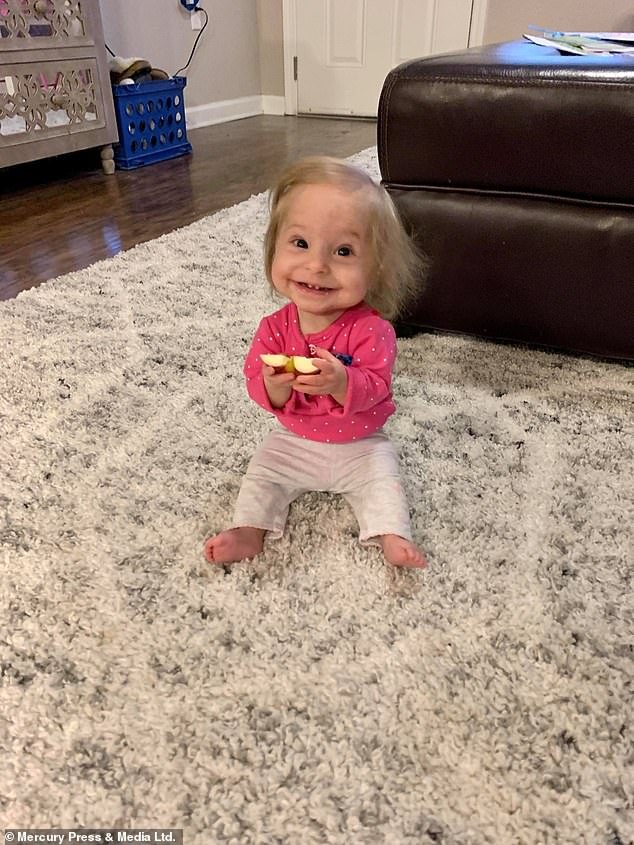 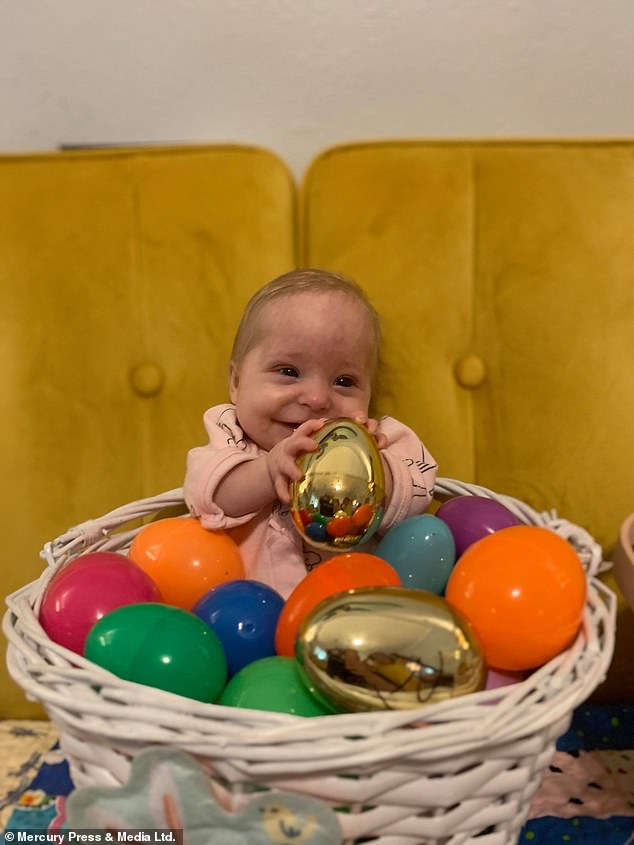 What a good egg! Abigail spent eight weeks in hospital after being born, and was diagnosed with the rare condition Microcephalic Osteodysplastic Primordial Dwarfism Type II? 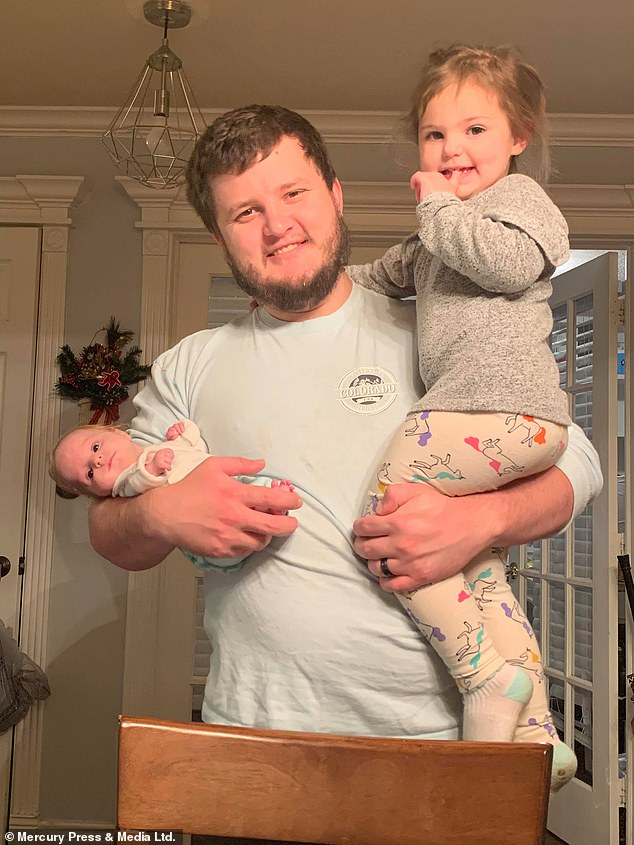 Bryan holding Abigail, left and Samantha, right. Emily admitted she had never heard of her daughter’s condition and didn’t know what to do