By Christopher Stevens for the Daily Mail

Now there’s a novelty: a travelogue with no railways, presented by a bloke who isn’t a comedian, wasn’t ever a politician — and who can’t cook.

And Paul Murton definitely can’t cook. No one has ever made a more gloriously inept mess of a culinary interlude than his fish fry-up on Grand Tours Of Scottish Lochs (BBC2).

To impress archaeologist Cathy Dagg, the 62-year-old tried to recreate a dish with dried red herring, a fish that in the 18th century was caught and processed on Scotland’s west coast before being shipped to the Caribbean — where it was a staple food for slaves on sugar plantations.

Paul deboned the herring with a knife like a man scraping dog muck off his shoe. Then he cremated it in a pan with lumps of scotch bonnet peppers. 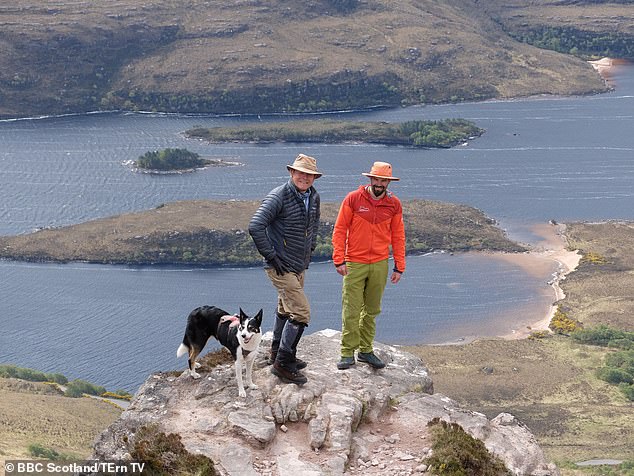 The fumes made Cathy choke before she staggered off-camera, gasping for air, but she bravely sat down to salve Paul’s pride by trying a bite. ‘It’s not terrible,’ she told him, with tears in her eyes, but she was plainly lying.

His recipe for the show was much better. In this half-hour tour of the Wester Ross lochs, Paul crammed in at least a dozen short stories. Some needed no more than a sentence and vintage photo — like the salute to a defiant gay duo called Jack and Roy, who lived in remote Scoraig as a married couple in the Forties.

They started a mail-order business, ‘selling organic onions and carrots to lonely lighthouse keepers’. I can’t decide whether that’s a true story or something Frankie Howerd made up.

A retired physicist called Alan, who has been carving violins from sycamore wood for decades in his crofter’s hut, revealed the secret of contentment: ‘I never get bored of it. I’ve got a stove to keep warm in winter, and music. I’m a happy man.’ And a wise one.

In Ullapool, Paul learned about the Soviet sailors who anchored offshore during the Seventies in factory ships that bought and processed everything local trawler men could catch. The fleet sailed home to the USSR with hundreds of tons of mackerel on ice. During the Cold War, even the fish was frozen.

Fast-paced story-telling peppered with a few unexpected facts will always make entertaining telly. If there’s an accompanying cookery book, though, I’ll give it a miss.

Nudists of the night:

John Barnes chatted to naturists Mike and Shan on Harry Redknapp’s Sandbanks Summer (ITV). There are no laws against getting your kit off, Shan insisted: ‘You could in Tesco’s.’ Beware unexpected items in the bagging area…

Pace is the problem with Jon Snow’s tungsten-tipped quiz, Very Hard Questions (More4). The idea is a great one — to tease us with impossible posers, and force contestants to throw away points by pleading for clues.

For instance, Brazzaville was the sequel that was never made to what Oscar-winning film? And if you don’t know, here’s a clue: the piano in the movie later sold for $3.4 million.

The answer? You must remember . . . Casablanca.

This should be a simple and winning concept, but Jon slows it down to a crawl by endlessly explaining how the clues work. Frankly, if you can’t work out what he means by ‘extra fact’, ‘first letter’ or ‘different question’, you shouldn’t be watching a show called Very Hard Questions.

While the players are deliberating over the rules, he keeps slipping in reminders: ‘You’ll lose a point if I give you another clue.’ Yes, Jon, you’ve said that several times and these people have IQs like mobile phone numbers.

Worse yet, Jon insists on adding the lamest of jokey introductions: ‘I often ask myself very hard questions — for example, why is ‘abbreviated’ such a long word?’

The canned laughter which greeted that line was like fingernails on a blackboard.

This could be a really smart quiz. It just needs to ditch the stupid bits.