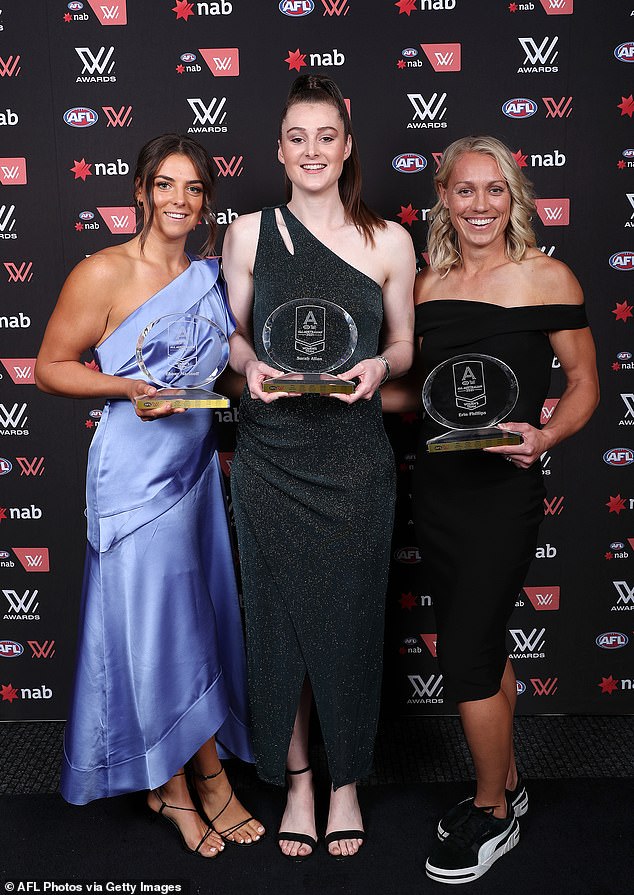 The AFLW’s most decorated player, Erin Phillips, says she has no thoughts of retirement after signing on with Adelaide for another season.

The 36-year-old has set her sights on extending her career beyond the next season.

‘I’m not going into this season thinking it’s my last,’ Phillips said in a statement on Thursday.

The AFLW’s most decorated player, Erin Phillips, says she has no thoughts of retirement after signing on with Adelaide for another season. Pictured (L-R) Ebony Marinoff, Sarah Allan and Erin Phillips at the 2021 W Awards in Adelaide on April 20, 2021

‘Hopefully there’s a couple of years still left in me.’

Phillips is also a dual club champion at Adelaide and the linchpin of the Crows’ two premierships in 2017 and 2019, winning the best-afield medal in both grand finals.

Her output last season was curtailed by a lingering knee injury – she played hurt in Adelaide’s grand final loss to Brisbane and then had arthroscopy surgery.

‘I have been given the green light by my surgeon and medical staff at the Crows after my knee arthroscopy,’ Phillips said.

‘And I feel confident that my body still has good footy left in me.

‘I’m really excited to have signed on with this incredible team for another year.

‘We fell heartbreakingly short last season and I want to have another go at getting back there.’

A former basketballer, Phillips played nine season in the United States’ elite WNBA and also represented Australia at the 2016 Olympics, when she was vice-captain of the Opals.

Phillips’ contribution to both basketball and the AFLW was recognised on Monday when she was awarded an Order of Australia Medal in the Queen’s Birthday Honours.

But her AFLW career had been subject of speculation after her knee injury, which struck midway through last season.

‘Erin led our best-and-fairest halfway through last year but the knee problem limited her output in the second half of the season,’ Adelaide’s head of women’s football Phil Harper said.

‘We look forward to seeing her at her best again in her sixth season.’