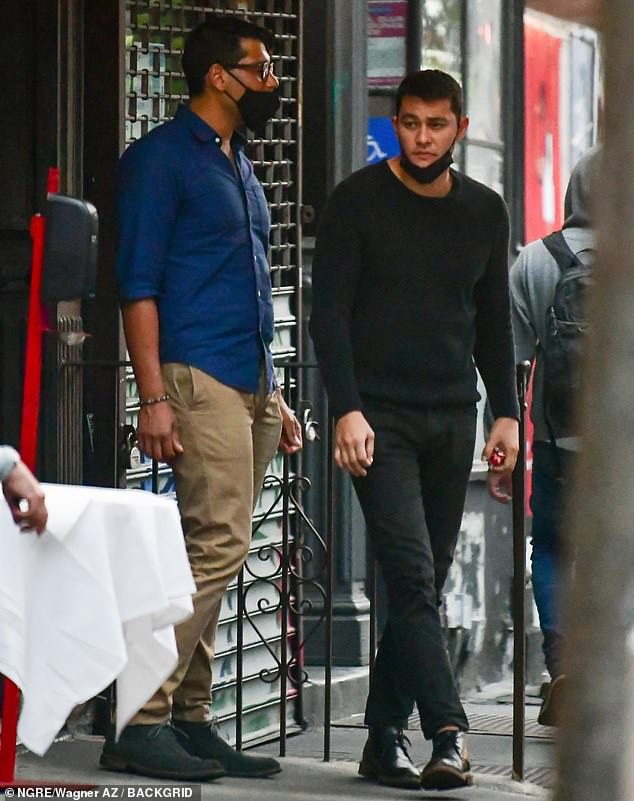 He spent the previous day on a romantic PDA-filled outing with his new girlfriend Katie Holmes in New York City.

But Emilio Vitolo Jr. was back to work on Tuesday, when he was spotted outside his popular restaurant Emilio’s Ballato in Manhattan.

The 33-year-old chef stepped out of the intimate restaurant to smoke a cigarette while chatting with his father Emilio Vitolo Sr., who owns the restaurant.

Daily grind: Emilio Vitolo Jr., 33, was back at work at his restaurant Emilio’s Ballato in Manhattan on Tuesday, following multiple days with his new girlfriend Katie Holmes

He matched it with slim black jeans and tasteful black boots, while also wearing a black mask that he had slung under his chin so he could smoke.

His father sat at his regular chair outside the restaurant and wore a gray shirt with dark jeans and blue suede shoes.

In its positive review of Emilio’s Ballato, New York Magazine noted the restaurant has a ‘clubby’ atmosphere, partly due to Emilio Sr., who decides which customers gets a table and in what order they’ll be served fro his spot at the front.

Despite the insular style, plenty of celebrities have been drawn to the restaurants classic Italian dishes, including former President Barack Obama and Hollywood stars Tom Hanks and Bradley Cooper. 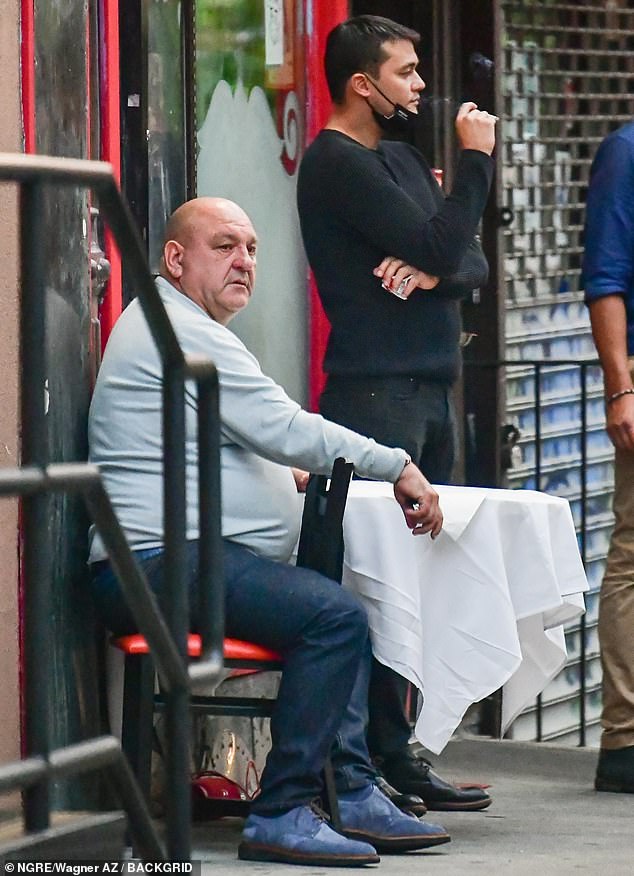 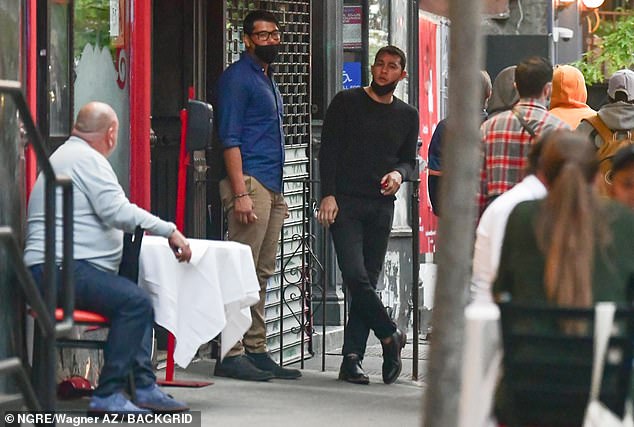 The restaurant has been described as clubby because Emilio Sr. decides where and when guests can sit from his spot at the front of the house. Barack Obama, Tom Hanks and Bradley Cooper have all dined there

The day before, Emilio Jr. enjoyed a ferry ride around New York City with Katie, who looked smitten with the chef.

Last week, DailyMail.com published photos of the chef and the 41-year-old Dawson’s Creek star locking lips outside of his restaurant just feet away from his father, who kindly averted his eyes.

On Wednesday, DailyMail.com also  revealed that Vitolo broke it off with his live-in fiancée Rachel Emmons, 24, via text when handsy photos of him and Holmes were first published, leaving the handbag designer shocked and forcing her to move back home. 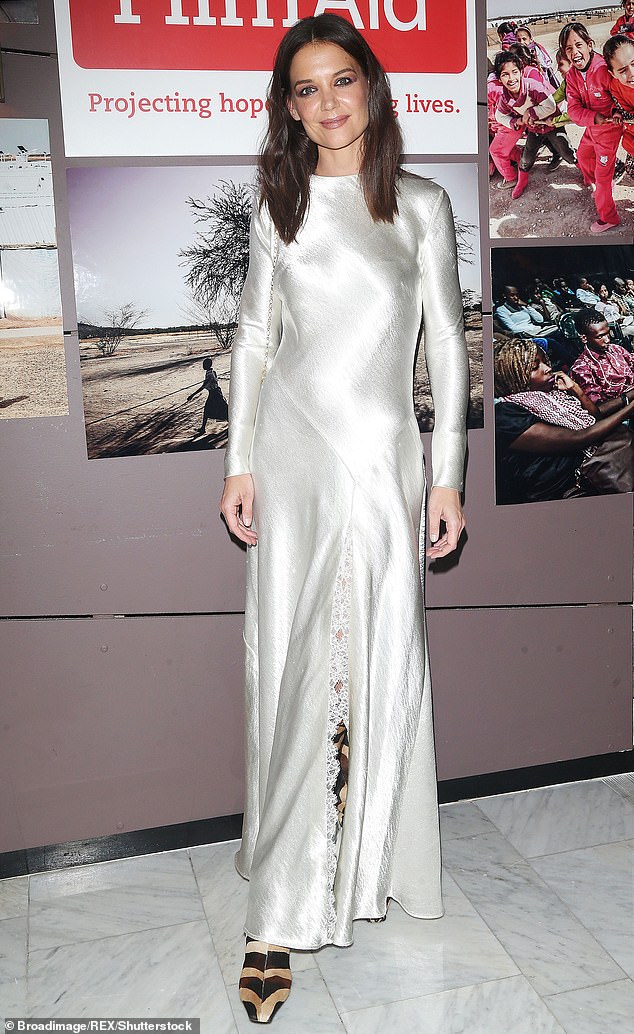 Lovebirds: The day before, Emilio Jr. enjoyed a ferry ride around New York City with Katie Holmes, 41, who looked smitten with the chef; shown in November 2019

Katie and Emilio’s friendship has been growing since October 2019, and she doesn’t seem to have been bothered by his engagement.

Katie and Emilio first met when a mutual friend introduced them, and their passions have only intensified since she returned home to New York City following time quarantining with her family in Ohio.

An insider close to the Logan Lucky star said she’s now behaving ‘like a teenage girl in love’ because Vitolo is ‘openly affectionate with her, left his fiancée to be with her and gives her something [her ex-boyfriend] Jamie [Foxx] couldn’t,’ the source added.

The insider said Holmes had been devastated by her breakup last year with the playboy actor, who never seemed to give up his roving eye and was still too close for comfort with his baby mama. 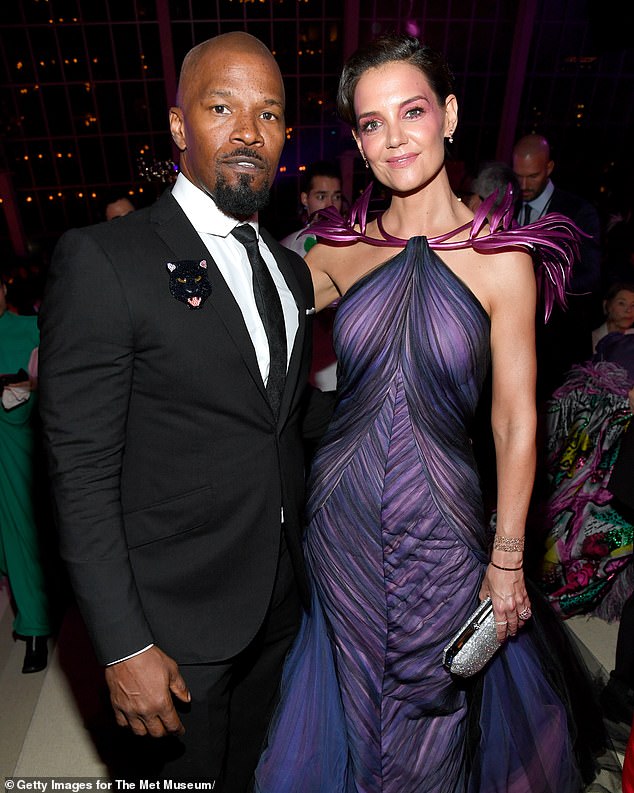 Moving on: Katie previously dated Jamie Foxx in 2013, following her 2012 divorce from Tom Cruise, but they split in 2019 shortly after going public as a couple; shown in May 2019

The acting couple were first linked in 2013 hand-in-hand through Malibu, but they kept their relationship private throughout the years.

The couple finally split after they took their relationship public last year at the Met Gala.

Prior to coupling up with Foxx, Holmes was married to Hollywood icon Tom Cruise.

The couple began their whirlwind courtship in 2005 and were married in seven weeks.

Katie filed for divorce in 2012, which was finalized after only ten days.

She and Cruise had welcomed their daughter Suri in 2006, who now spends her time with Katie, who has primary custody. 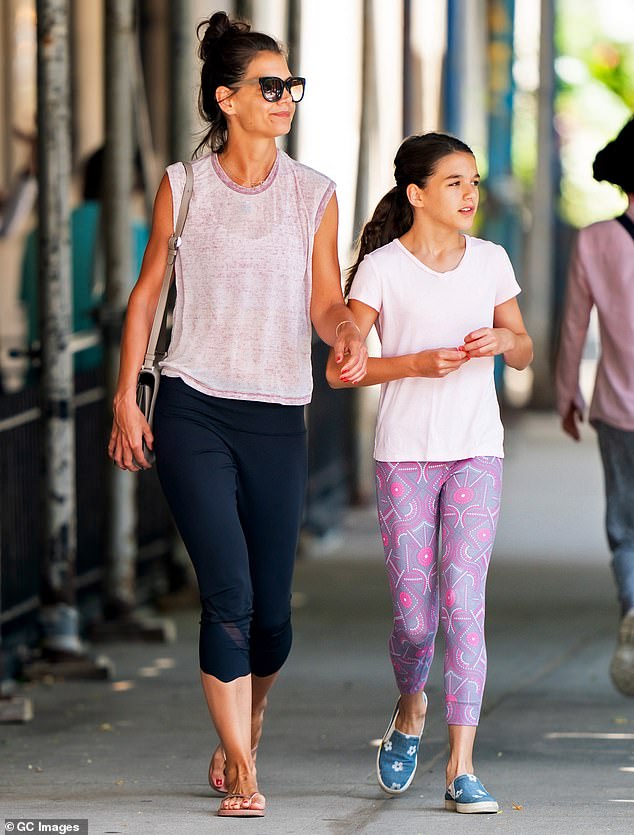 Family life: Holmes lives in NYC with her daughter Suri Cruise, whom she shares with Tom; pictured with Suri in July 2019