Bloomberg’s demand comes after Sanders indicated his previous release of doctors letters was all that he would provide the public, following his heart attack on the campaign trail.

Meanwhile, Bloomberg’s campaign released  the billionaire’s own doctors letters, proclaiming that he was in ‘outstanding health.’

Democratic presidential candidate Michael Bloomberg speaks during a rally at The Rustic Restaurant in Houston, Texas, on Thursday. His campaign pressured rival Bernie Sanders to release more information about his heart health after doctors proclaimed the billionaire was in ‘great physical shape’ 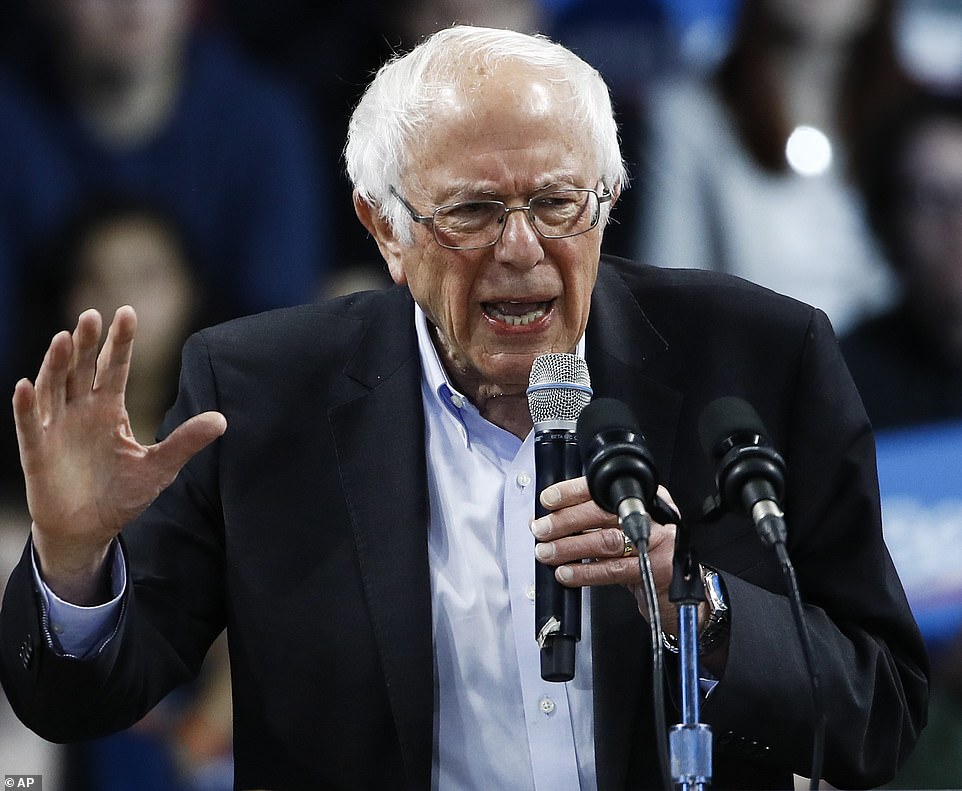 Democratic presidential candidate Bernie Sanders speaks during a campaign event in Spartanburg, South Carolina on Thursday. The senator from Vermont, who suffered a heart attack while on the campaign trail, previously released doctors letters attesting to his health

Bloomberg, who also was New York’s mayor for three terms, had his last annual health exam in July, reports Fox News, and underwent an annual cardiac stress test at the Johns Hopkins Hospital, according to a letter from his internist, Dr. Stephen Sisson.

According to the results of the test, Bloomberg had  ‘normal’ left ventricular cavity size, function and ejection at 60-65 percent.

He also had an ‘excellent’ exercise capacity, exercises several times a week, plays golf and maintains an active pilot’s license.

The candidate had small skin cancers removed and is treated for arthritis and heartburn, ‘both of which are well controlled.’

‘There are no medical concerns, present or looming, that would prevent him from serving as President of the United States,’ Sisson wrote. 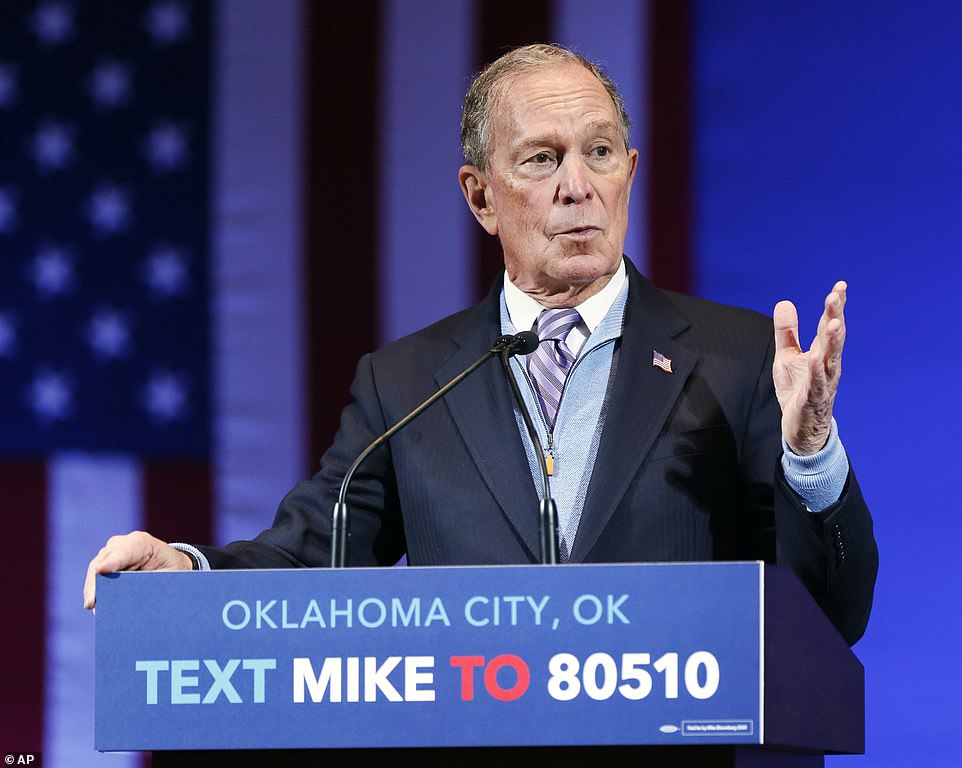 Bloomberg is pictured speaking during a campaign event at the Bricktown Events Center in Oklahoma City, Oklahoma, on Thursday. His campaign announced the same day that he had his last annual health exam in July, and underwent an annual cardiac stress test at the John Hopkins Hospital 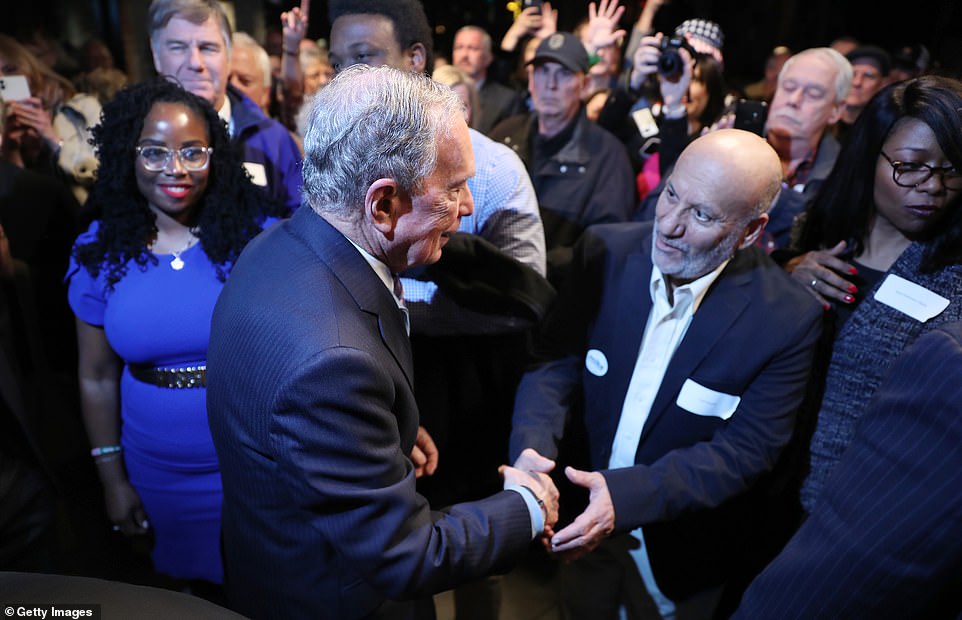 Bloomberg, who also was New York’s mayor for three terms, greets people during a rally held at the Record Downtown on Thursday in Bentonville, Arkansas. According to the results of his annual cardiac stress test, Bloomberg had ‘normal’ left ventricular cavity size, function and ejection at 60-65 percent 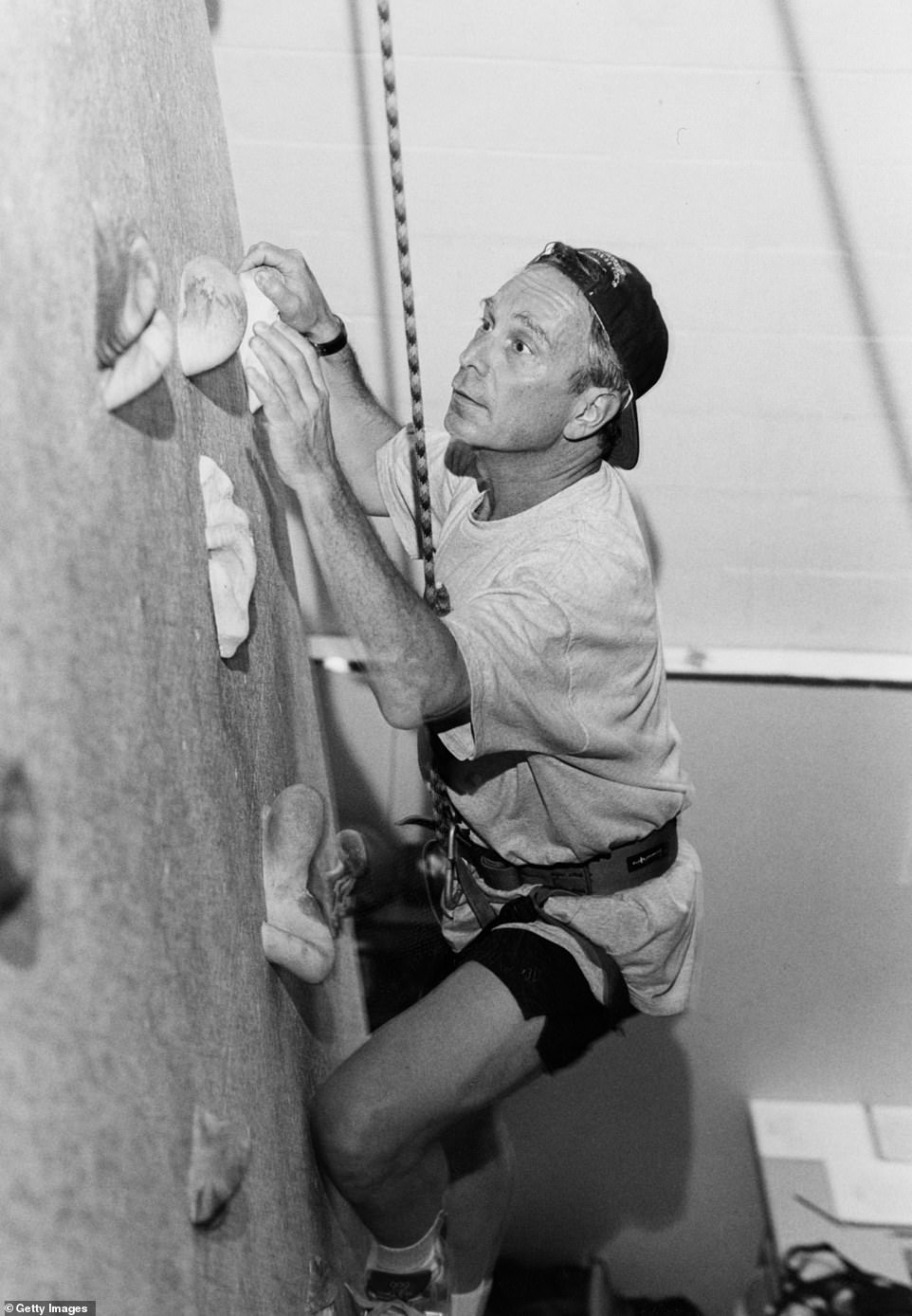 Bloomberg also had an ‘excellent’ exercise capacity and exercises several times a week, his doctors say. The candidate is pictured climbing an indoor climbing wall when he was in his late 40s 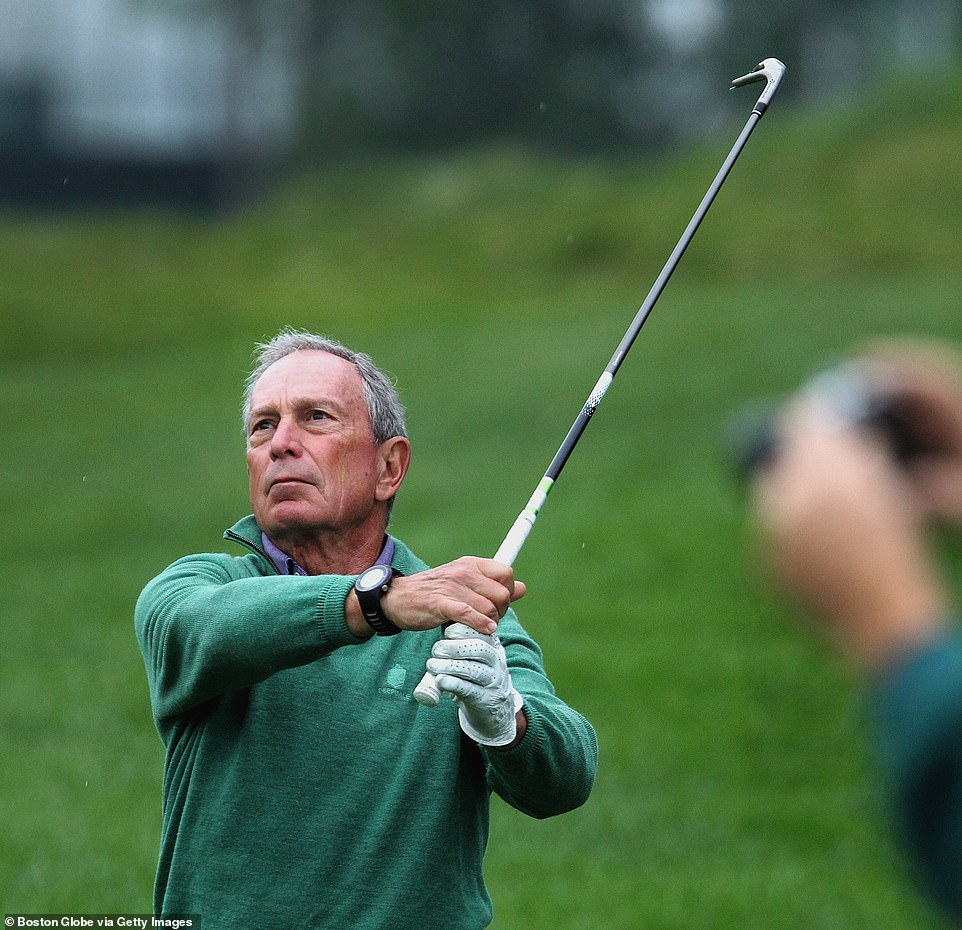 Bloomberg’s doctors letters boasted the candidate also plays golf and maintains his pilot license. He is pictured as a member of Tiger Woods’s group during the Pro-Am tourney of the Deutsche Bank Championship at in Norton, Massachusetts, in 2013

Bloomberg and Sanders, both 78, are the oldest candidates in the field of Democrats seeking the presidential nomination in the 2020 contest against incumbent US President Donald J. Trump.

Sen. Elizabeth Warren of Massachusetts is 70.

The letters from Bloomberg’s doctors come as Sanders has taken the lead as the Democratic front-runner for the party’s nomination. Bloomberg, meanwhile, has been using his substantial wealth to spend millions on ads aired in several states that he needs to win on Super Tuesday next week. 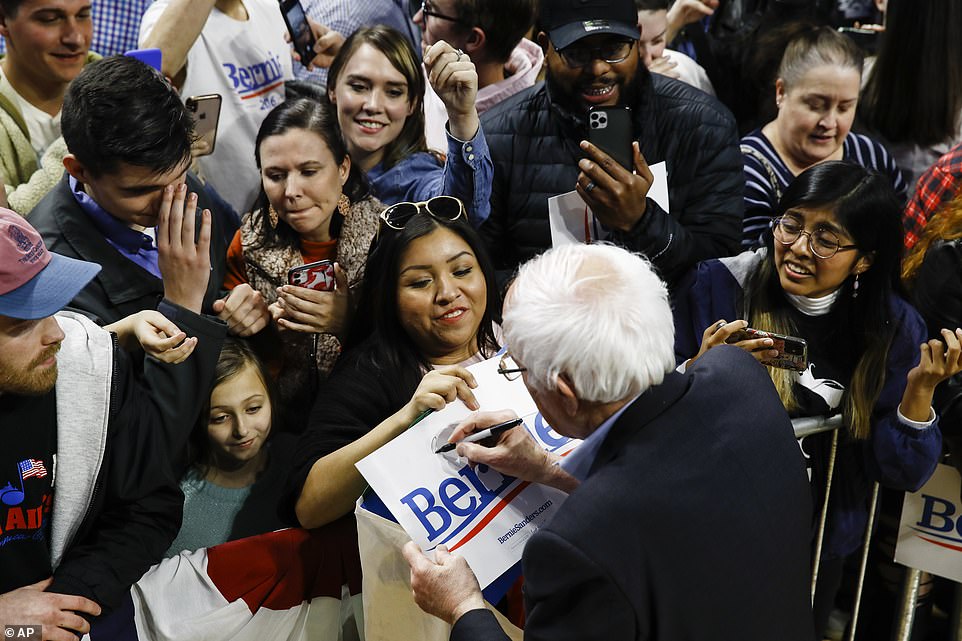 The letters from Bloomberg’s doctors come as Sanders has taken the lead as the Democratic front-runner for the party’s nomination. Sanders is pictured signing autographs during a campaign event in Spartanburg, South Carolina, on Thursday

At this week’s Democratic debate in South Carolina ahead of the state’s primary on Saturday, Sanders sidestepped a question about releasing his full medical records following a heart attack he suffered in October.

He pointed to Bloomberg in response, in reference to a stent procedure the billionaire had more than 20 years ago. ‘I think the one area maybe that Mayor Bloomberg and I share — you have two stents, as well,’ Sanders said.

Bloomberg fired back, ’25 years ago.’

‘Well, we both have two stents,’ Sanders said in response.

‘It’s a procedure that is done about a million times a year,’ the candidate added.

‘He has not had a myocardial infarction, and cardiac stress testing has shown no evidence of damage to his heart. Heart function is normal, and exercise capacity is excellent,’ the doctor explains.

A Bloomberg campaign spokesman said releasing ‘this single scientific number about heart health could start to put to rest any concerns about Senator Sanders’ secrecy about his recent heart attack.’

‘Mike Bloomberg’s doctor shared Mike’s number, will Senator Sanders ask his doctor to do the same?’ the spokesman, Stu Loeser, said in a statement.

A doctor earlier this week called on Sanders to release his additional heart health information.

However, Sanders says he doesn’t plan to divulge anything more after releasing ‘comprehensive’ medical records.

His campaign waited until New Year’s Eve to put out letters from three doctors attesting to his health – a move traditionally deployed to avoid scrutiny. But the three letters are not the same as medical records.

The president of the American College of Cardiology, Richard Kovacs, told NBC News that Sanders should release the results of his left ventricular ejection fraction, which is given to any patient after a heart attack and is a measure of how much blood volume the heart pushes out with an individual heartbeat.

It can correlate with the risk for future cardiac events and mortality rate.

‘Normally the heart will push out 60 per cent,’ Kovacs said. ‘If you go down to 40 or 50 percent, we regard that as mild impairment of the left ventricle. Thirty to 40 percent would be moderate. If you get to 30 percent, that would be severe.’

Sanders has not revealed what his number was at the time of his heart attack or what it is currently.

The three letters, Kovacs says, ‘imply with the heart attack that he (Sanders) had diminished heart muscle strength,’ or a lowered fraction.

‘It’s a patient’s personal private information but there’s the importance of the number,’ Kovacs said. ‘They’ve chosen not to reveal the ejection fraction.’

The ejection fraction rate is a good indicator of the progress of Sanders’ recovery, Kovacs said.

When Sanders was asked whether he would release more details, he simply responded: ‘you can start releasing medical records and it never ends.’

‘I think we have released a detailed medical report, and I´m comfortable on what we have done,’ he said during a recent town hall.

‘We have released as much’ medical information ‘as any other candidate,’ he told Meet the Press earlier this month.

Questions about Sanders’ health have lingered ever since he checked into a Las Vegas hospital with chest discomfort on October 1 and had two stents inserted.

His campaign didn’t acknowledge that he had suffered a heart attack until his release several days later.

‘Full transparency would be to release his ejection fraction,’ said another cardiologist Dr. Hadley Wilson.

‘A subsequent stress test in January and the other information about his clinical response were all very positive and encouraging,’ Wilson said.

‘I don’t really know why Sanders wouldn’t release it’, he added. ‘It is an important baseline but it does have to be taken into the whole clinical context, including the fact that Sanders hasn’t had additional incidents, which is all positive’, he said.

Martin LeWinter, Bernie Sanders’ cardiologist, was one of the three doctors signing letters. He is professor of medicine and attending cardiologist at the University of Vermont Medical center

Martin LeWinter, Bernie Sanders’ cardiologist, was one of the three doctors signing letters. He is professor of medicine and attending cardiologist at the University of Vermont Medical center

Tobacco: No history of tobacco use

Medical history: Most significant treatment was in October after a heart attack, with two stents inserted after acute blockage of a coronary artery. Received medication to improve heart function and provide anti-platelet therapy and was released after three days. Blood thinning and beta-blocking medication was later discontiuned. Has also been treated for gout, hypercholesterolemia, diverticulitis, laryngitis secondary to esophageal reflux and lumbar strain. Has had superficial skin lesions removed.