By Chantalle Edmunds For Mailonline

This shocking dashcam footage shows the moment a car loses control on an icy motorway and skids backwards before smashing into a barrier at speed.

The dramatic video of the crash was released by Highways England to warn motorists to drive safely during adverse weather conditions – as snowfall is expected around the UK over the weekend and in to next week.

The red Nissan Micra is seen skidding backwards at speed into the central reservation along a stretch of the M61 in Lancashire in March last year.

The vehicle then collides into a Highways England vehicle, narrowly missing traffic officer Nigel Gorton who had been dealing with a different incident. 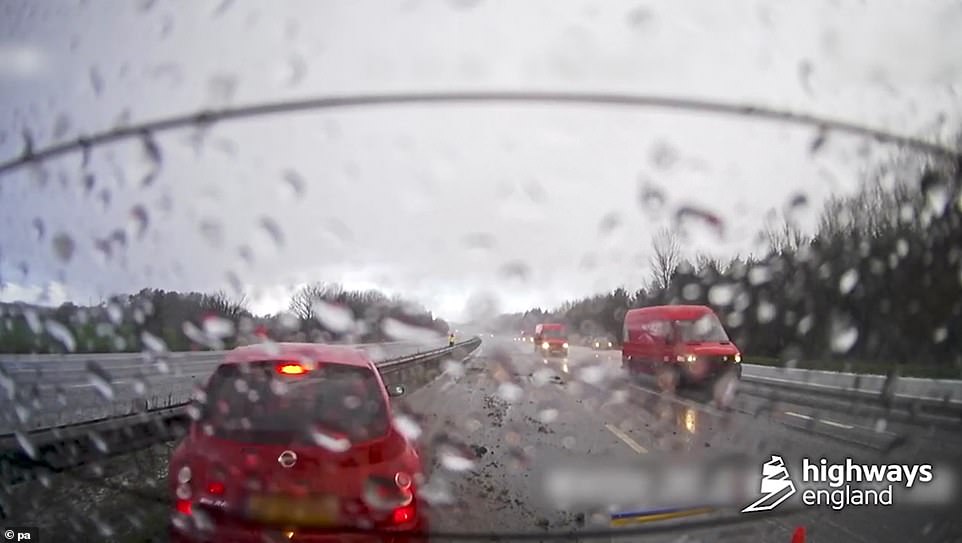 The red Nissan Micra is seen skidding backwards at speed into the central reservation along a stretch of the M61 in Lancashire in March last year. The dramatic video of the crash was released by Highways England to warn motorists to drive safely during adverse weather conditions

No one was seriously injured in the collision.

Nigel, who is a team manager at Highways England’s Samlesbury depot near Preston, said: ‘We’d had a report of a collision on the M61 so I’d been dealing with that when I spotted the car skidding out of control towards me.

‘Luckily, I was able to jump over the barrier in time but a few minutes earlier I’d been getting cones and warning signs out of my car boot, so I dread to think what would have happened if I’d still been there.

‘I’d definitely urge motorists to make sure they drive to the conditions as it takes a lot longer to stop in when the roads are icy, and any sudden manoeuvres can lead to you losing control of your vehicle.’

The footage was released to remind drivers to take care on the roads after the Met Office issued a yellow weather warning for snow and ice.

He said: ‘Through the course of the next 10 days we are going to see a switch to something more wintry.

‘Over northern Britain, we are looking at temperatures down to -12C or even lower as a Polar front comes down across the country.

‘Where this cold air meets incursions from the Atlantic could be interesting, we are keeping our eyes on snow through this period.

‘Snowfall over the coming days will largely be over high ground in Scotland but we may see something elsewhere.

‘We are looking at potentially the coldest spell of winter so far, and after the mild weather so far, we are about to get the winter we haven’t had.’ 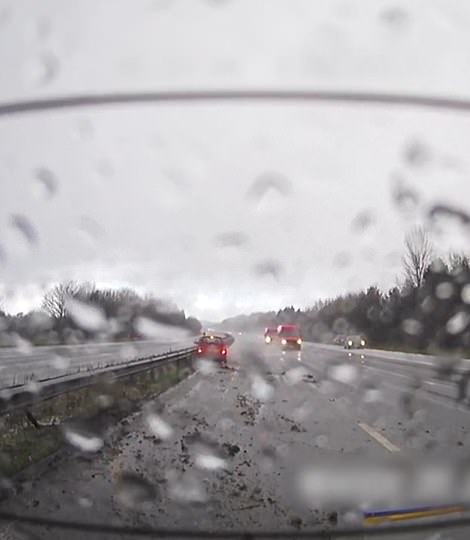 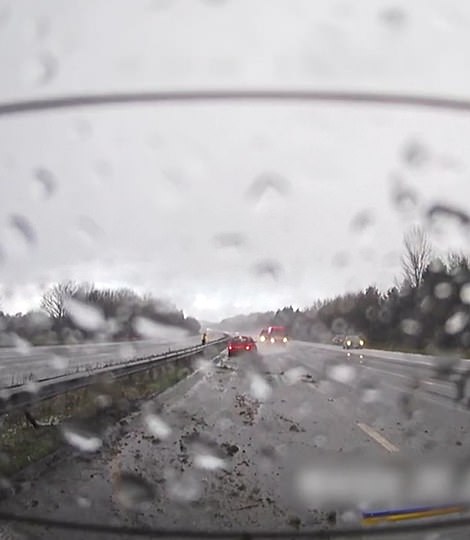 Dashcam footage shows the vehicle colliding into a Highways England vehicle, narrowly missing traffic officer Nigel Gorton who had been dealing with a different incident. No one was seriously injured in the collision along a stretch of the M61 in Lancashire in March last year 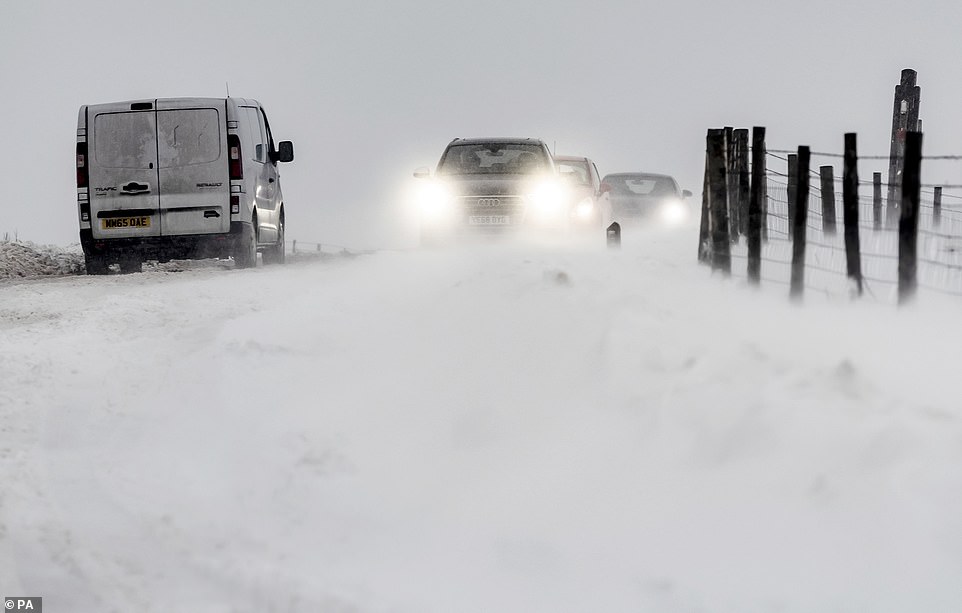 The Met Office has said the South and parts of Wales are also expecting snow today (pictured, snow in the Peak District this morning)

Parts of Wales and northern England could also see up to 80mm of rain – a month’s worth – this afternoon as the storm hits.

Downpours have already begun in the West Country with torrential rain forcing the closure of roads after a car smashed into the central reservation on the A38 at Moorswater, near Liskeard, Cornwall.

Jorge, which was named by Spanish meteorological services rather than the Met Office, could bring strong winds to much of England, Wales and Northern Ireland on Saturday, reaching 70mph on coasts and up to 60mph inland.

Police have warned flood-hit families across Shropshire and Worcestershire, where evacuations have been taking place in towns throughout this week, to expect ‘another ten days of difficult conditions’ with more heavy rain due. 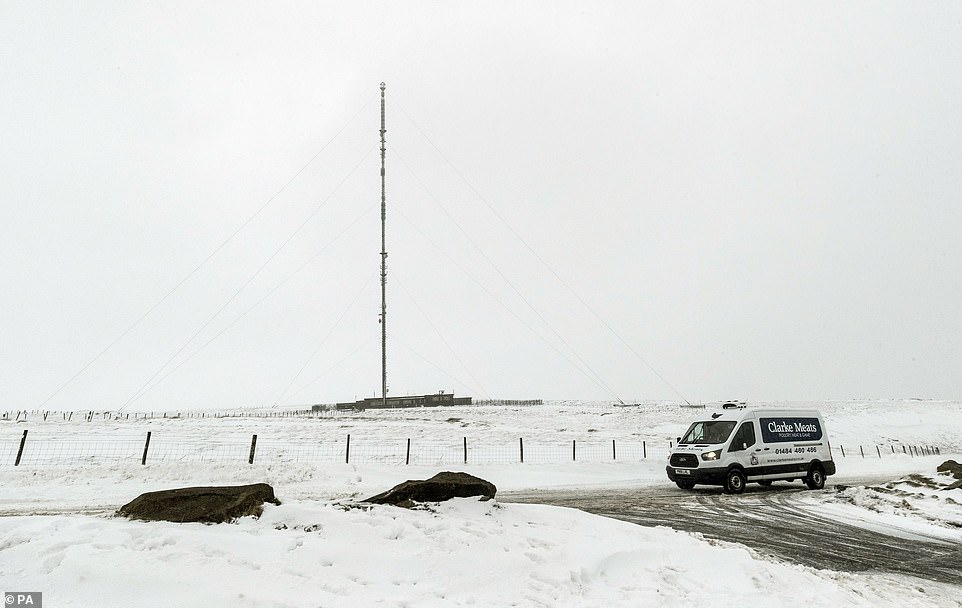 Photographs show the dramatic views in Peak District forest and across the hills (pictured, snow in the area). Roads in Derbyshire and Yorkshire were closed due to the icy weather causing travel chaos 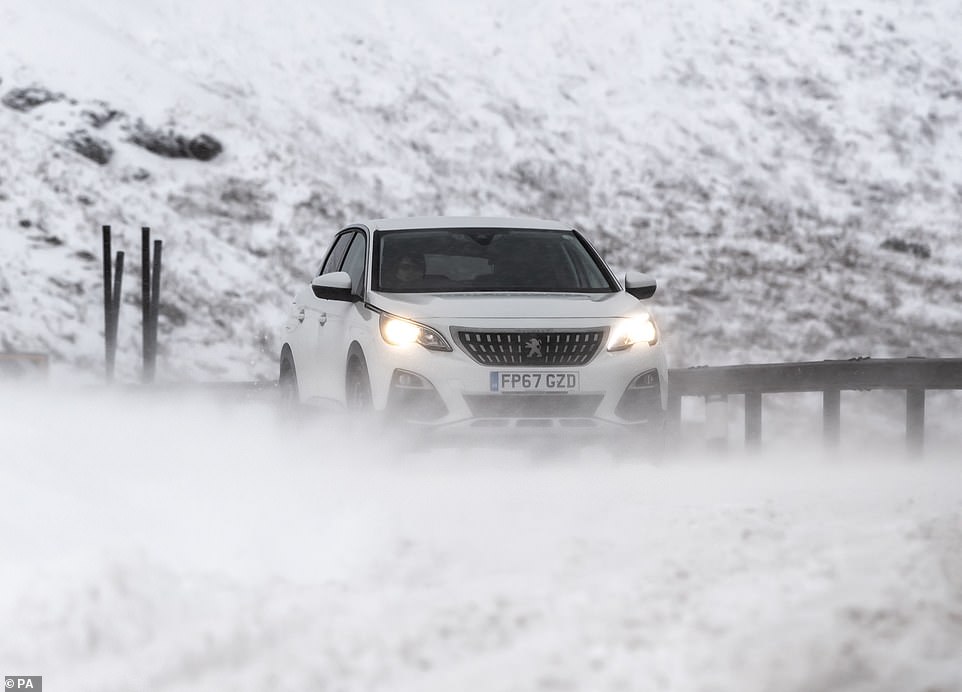 The Peak District was covered with a blanket of snow, as the Met Office issued weather warnings for most of Britain