A mother-of-four beat the 32 million-to-one odds when she gave birth to twin girls on Valentine’s Day for the second time in five years.

Joanna Gregory, 40, from Gorsgoch, West Wales, gave birth to non-identical twins Lola and Lexie on Valentine’s Day 2015, and did it again this year, welcoming twins Ava and Ella on the exact same day.

Ella and Ava were due on April 7 but were born eight weeks early, right on time for their big sister’s fifth birthday, and for Valentine’s Day, as their overjoyed mother said the whole set-up felt ‘magical,’ The Sun reported.

She joked her partner, Chris Lovell, 40, would have no excuse to forget Valentine’s Day, because they would be celebrating four birthdays in one from now on. 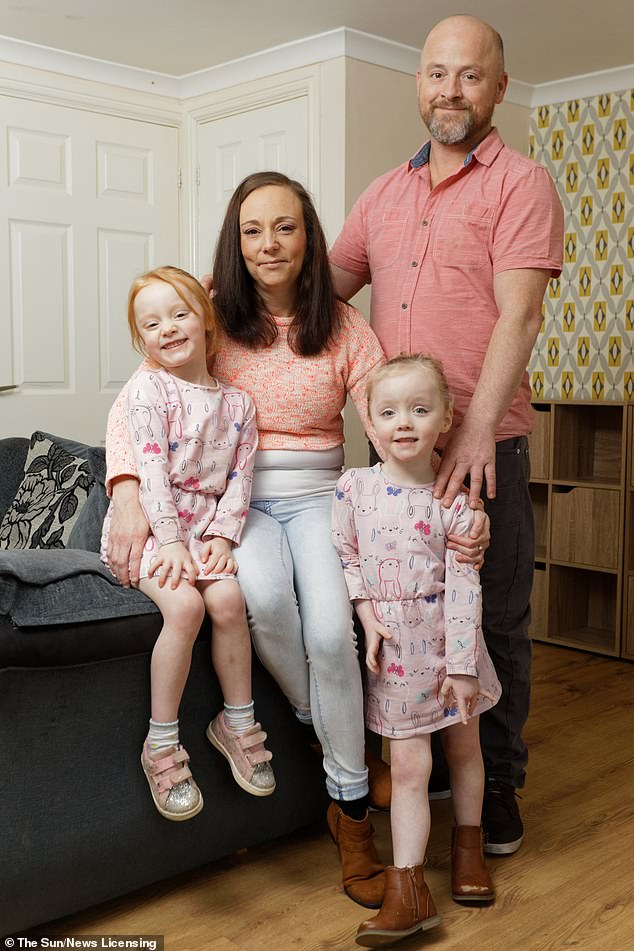 Joanna Gregory, 40, from Gorsgoch, West Wales, gave birth to nonidentical twins Lola and Lexie on Valentine’s Day 2015, and did it again this year, this time birthing twins Ava and Ella on the exact same day. Pictured: Joanna with her partner Chris Lovell, 40, and their twin daughters Lola (left) and Lexie (right), five 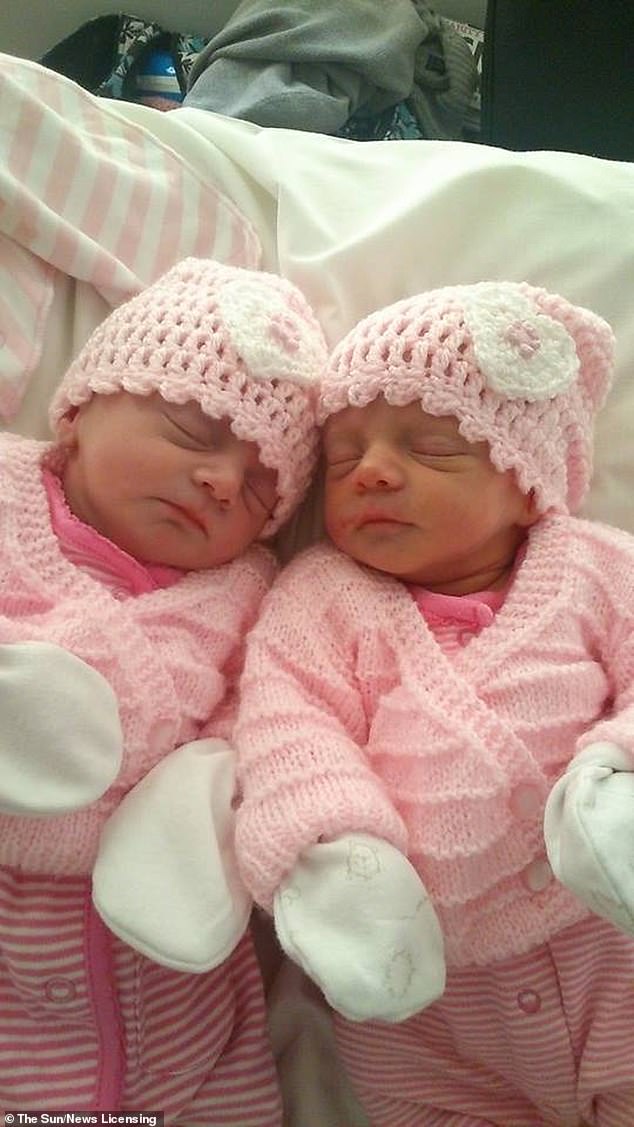 Ava and Ella (pictured) were born eight weeks early on February 14, the day of their older sister’s birthday 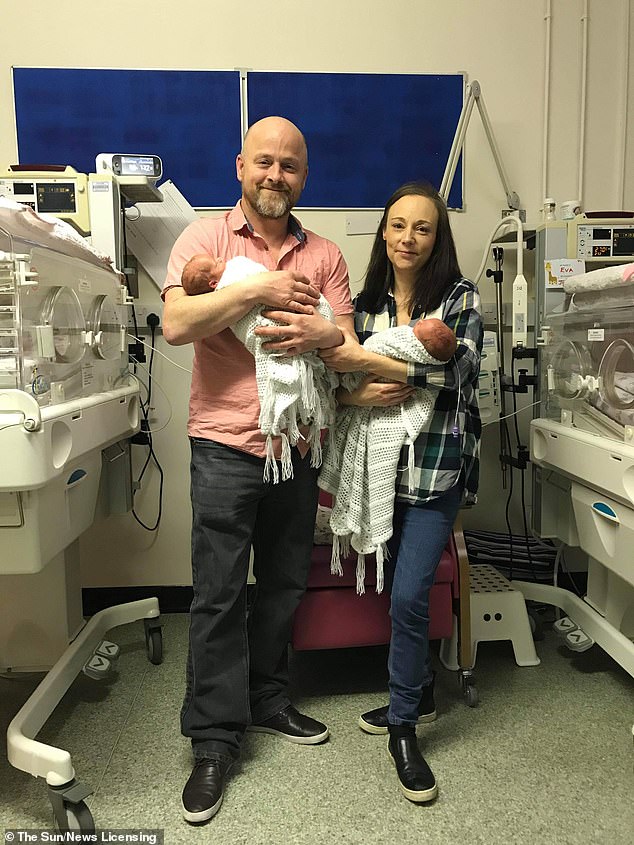 The first days following the twins’ birth were difficult, Joanna admitted, saying they had to be put on oxygen in the ICU (pictured) in order to survive outside of the womb

The happy mother said the early birth of Ava and Ella was a ‘lovely surprise,’ but it was not without its ups and downs, as Joanna revealed the tots needed oxygen to survive after birth and spent several days in the Intensive Care Unit (ICU)

Joanna had been admitted into hospital in Carmarthen after doctors expressed concerns over Ella’s weight. She was then transferred to a specialist neo-natal intensive care unit in Newport.

There, she had an emergency C-section on February 14, with 3lbs 6oz Ava coming in first, closely followed by Ella, who weighed 3lbs 3oz.

‘I was unable even to cuddle them and it was hours before I could see them. It was heartbreaking, but necessary. 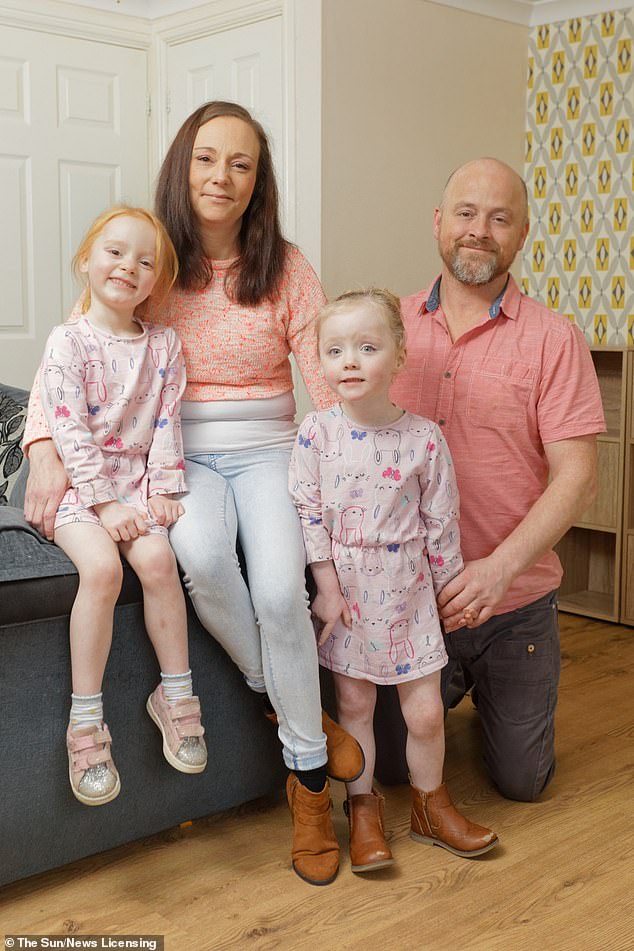 Chris (right) said twins had not run in the family before the birth of Lola and Lexie (pictured), but definitely did now. The odds for two set of twins to share the same birthday is 32million-to-one 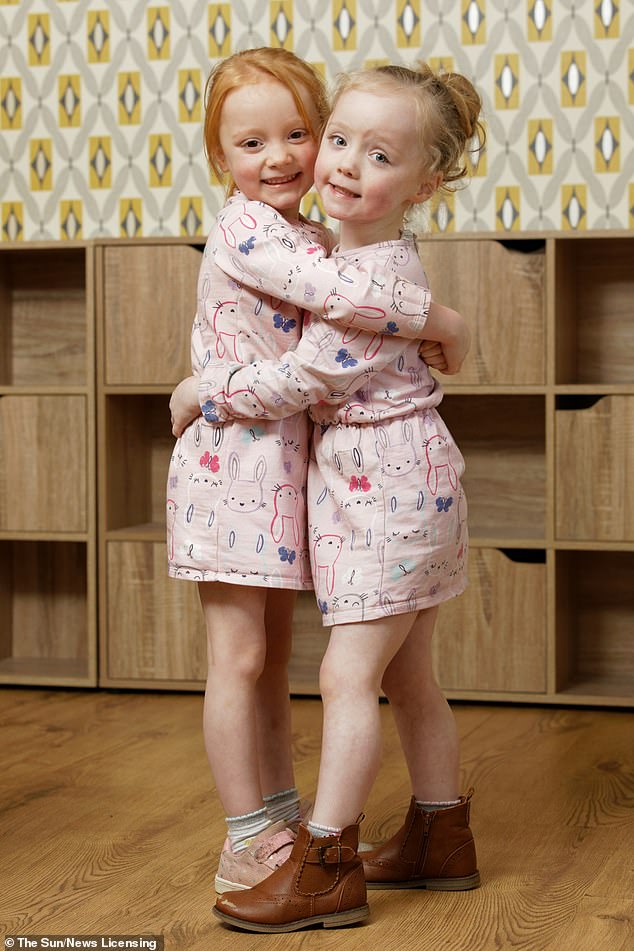 Lola and Lexie hugging each other. Joanna said there was no excuse to forget either of their children’s birthday, as they all share the same 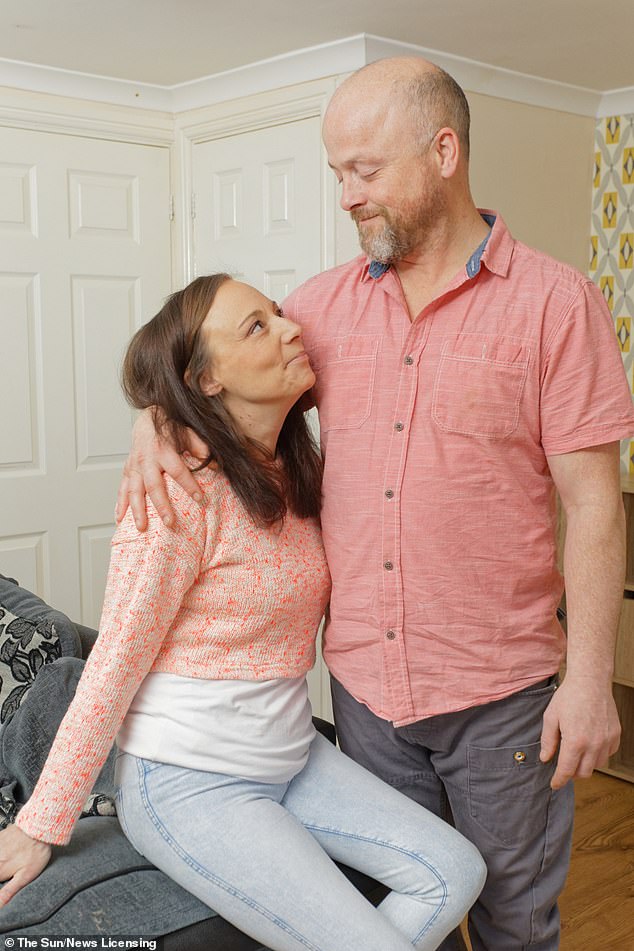 ‘Lola and Lexie were very small, but Ella and Ava are even smaller,’ Joanna said, adding the twins were in fact so small, she was not able to touch or hold them until three days later.

The family went through a difficult period when Ella had to stay in the Newport Intensive Care Unit while Ava was well enough to be transferred to the hospital in Carmarthen.

Thankful Joanna said the caring staff at both hospitals save her daughters’ lives. 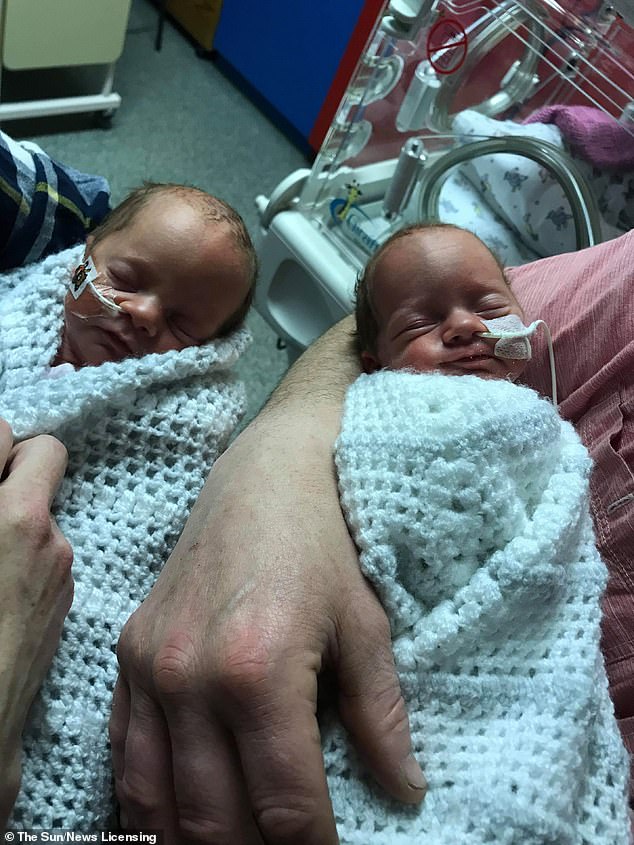 The happy mother said the early birth of Ava and Ella (pictured in hospital) was a ‘lovely surprise,’ but it was not without its ups and downs, as Joanna revealed the tots needed oxygen to survive after birth and spent several days in the Intensive Care Unit (ICU) 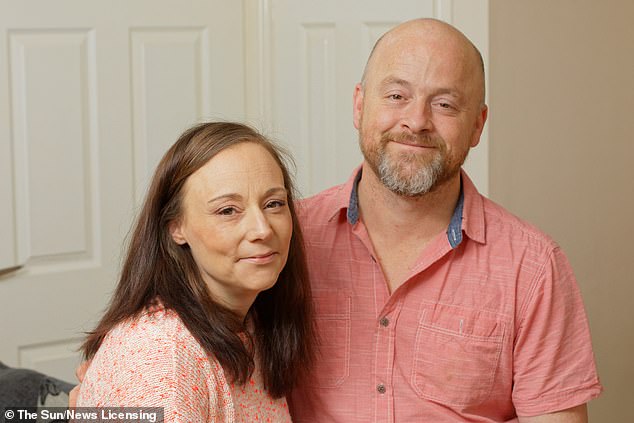 In spite of the stress following their tots’ birth, the couple are in love with their ‘gorgeous’ daughters

But little Ella eventually pulled through, and the twins were reunited last weekend, and are now sleep in adjoining cots while they gain enough strength to make it home.

Joanna said that Ava is now off oxygen and drinking milk, a show of strength for a premature baby, and she hopes Ella would soon follow suit.

Father-of-four Chris said twins had not run into the family until the birth of Lexie and Lola, but certainly did now.

He added he would have never expected to have another set of twins after the birth of the five-year-olds in 2015, but had been delighted to find out Ava and Ella were on the way, and said the twin girls were ‘gorgeous.’

According to the NHS, 12,000 sets of twins and about 190 sets of triplets were born in the UK, which means one in 65 births in the UK are twins, triplets or more. 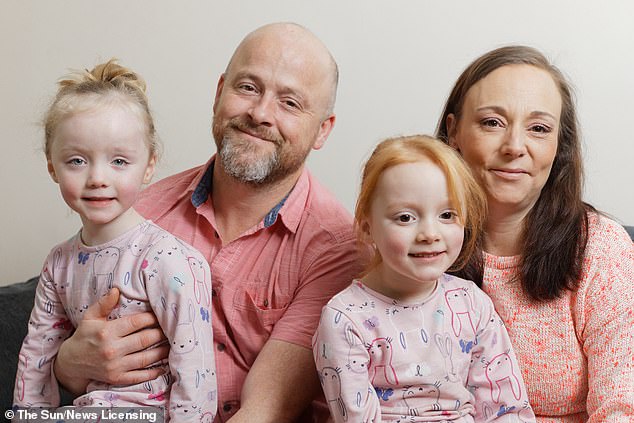 The twins are still in hospital in Carmarthen, but Joanna hoped to soon be able to take them home 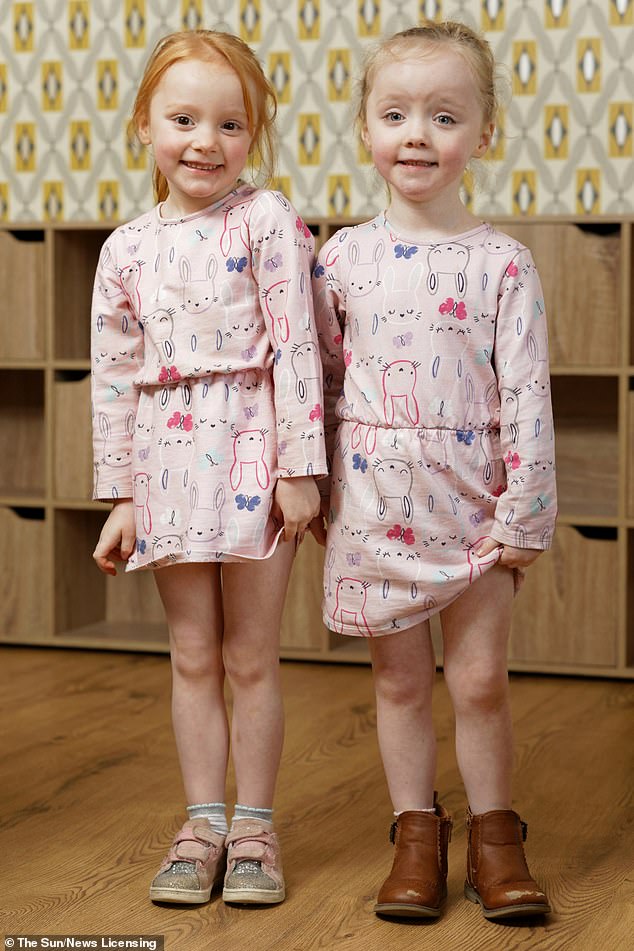 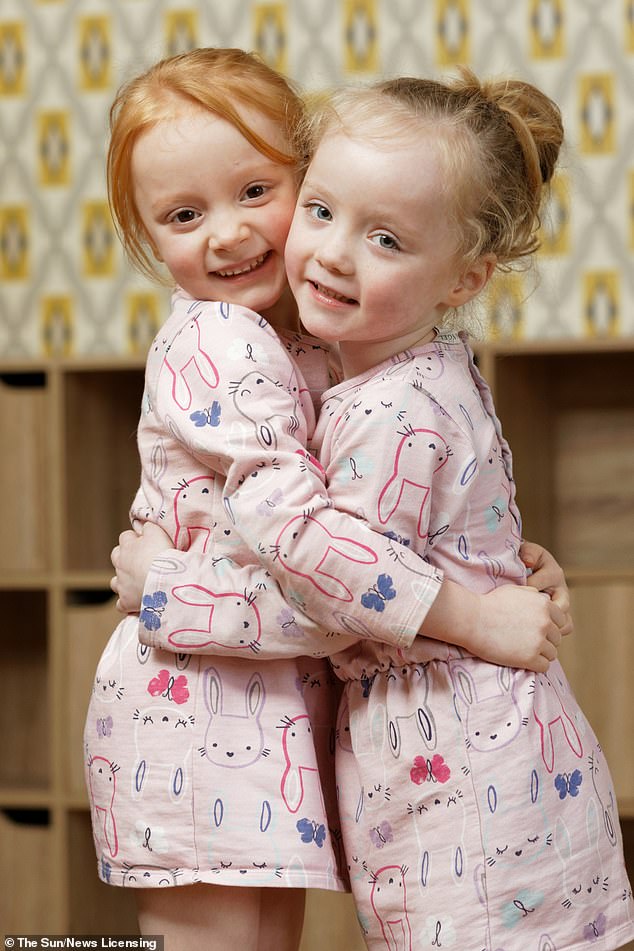