Can’t be bothered to spread mayo on your sandwich? Japanese food giant launches SLICED mayonnaise – and it could be coming to the UK

By Bridie Pearson-jones For Mailonline

If the thought of scraping the last mayo out of the jar is a task too far, then sliced mayonnaise may be the answer to your prayers.

Created by Japanese food giant Bourbon, the unusual condiment which will be launched next month, has divided reaction on social media.

The slices follow on from the company’s foray into chocolate spread slices, which was a roaring success.

Some Twitter users have dubbed them an innovative solution to saving time when making sandwiches and called them ‘the best thing since sliced bread’, while others claim it’s ‘disgusting’ and ‘a step too far’. 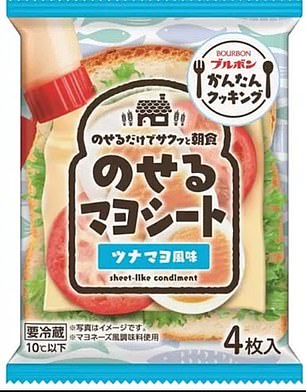 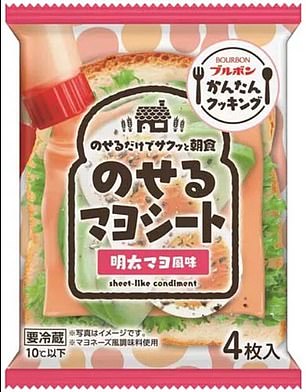 A Japanese food firm has launched sliced mayonnaise splitting the opinion of condiment fans online. The slices come in two flavours, tuna and spicy cod roe, which are designed to spruce up a sandwich or even a bowl of pasta.

The slices come in two flavours, tuna and spicy cod roe, which are designed to spruce up a sandwich or even a bowl of pasta.

It’s not known if they’ll be available outside of Japan yet, where they’ll go on sale for the equivalent of £1.40 for a pack of four from March 2.

However, the brands chocolate spread slices are available to buy online in the UK, meaning there’s hope for those keen to save themselves the task of spreading mayo on a sandwich.

Taking to Twitter, fans have been left very split  with one writing: ‘My coworker just told me that the Japanese invited sliced mayo and it’s coming to the US. All I gotta say is WHY TRY TO FIX SOMETHING THAT’S NOT BROKEN’

Taking to Twitter, fans have been left very split of the slices, with some sharing their disgust, while others were delighted at the idea.

Another added: ‘I am both grossed out and intrigued’

A third questioned: ‘Oh no, not the sliced mayo’.

‘What the f*** do you mean there’s sliced mayo’ one Twitter user bemused.

‘I gotta say that this Japanese sliced mayo may be a little too much even for me’ said one.

Some Twitter users have dubbed it an innovative solution to saving time when making sandwiches and called it ‘the best thing since sliced bread’ while other have called it ‘disgusting’ and ‘a step too far’.

Others were more positive, dubbing the invention futuristic.

‘Sliced Mayo? I’ve never heard of that, I gotta check that one out’ added another.