The next time you hear someone describe a woman as having a ‘magnetic beauty’, don’t assume they’re talking metaphorically. Because magnets are making their mark in the world of cosmetics in some very unusual ways.

Whether it’s using magnets to make geometric patterns in nail polish (as seen on actress Jodie Turner-Smith at this year’s Baftas), as an innovative alternative to eyelash glue, or to lift away impurities from the skin in the form of a space-age mask, the laws of attraction are being put to good use.

But is it all positive — or, as with magnets themselves, are there negatives, too? We put some magnetic beauty products to the test… 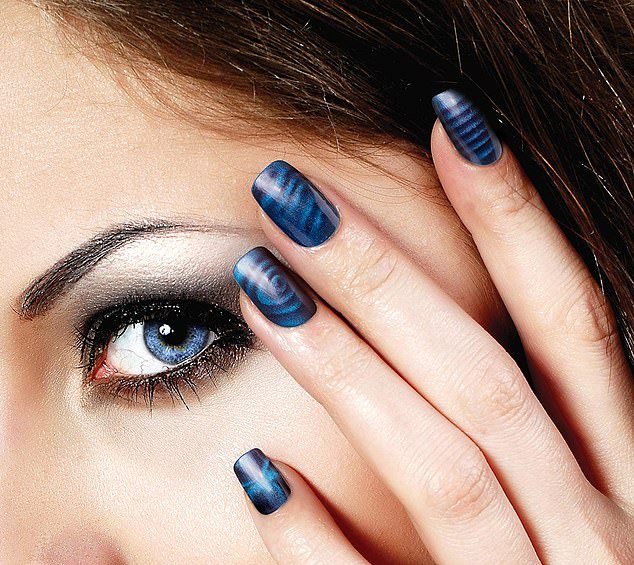 Magnets are making their mark in the world of cosmetics in some very unusual ways. Pictured, swirls and stripes created with the Rio Magnetic Magic Nail Polish set

HOW TO LOCK DOWN YOUR FALSIES

While once false lashes were just for special nights out, over recent years they’ve become part of many women’s daily make-up routine. In fact the global market in false eyelashes is predicted to be worth a staggering £1.23 billion by 2025.

Magnetic lashes are one of the latest innovations and are touted as a godsend for anyone who has found that the glue traditional lashes require irritates their skin, or if your forays into falsies (and those fiddly strips) have ended in a sticky mess.

Essence Lash On Lash Off Volumizing Magnetic False Eyelashes (£6, Wilko) are shorter and designed to be worn to enhance just the outer lashes

While a number of false lash brands including Ardell, Eylure and Lash Perfect offer magnetised versions, I decided to try Essence Lash On Lash Off Volumizing Magnetic False Eyelashes (£6, Wilko), which are shorter and designed to be worn to enhance just the outer lashes.

Like all magnetic lashes, they come in pairs — a top and bottom set — and each strip has a number of tiny magnets fixed to it along the band that sits closest to the lash line.

The theory was easier than the reality — I struggled to get the magnets of the top lashes to stay close enough to the lash line that they didn’t look ridiculous.

There may be a cunning trick — or maybe it’s just practice.

If you struggle with getting false eyelashes to sit in a convincing way (see previous), you might be interested in a magnetic gel liner.

Ardell, which has been making false lashes for nearly 50 years, has brought them bang up to date with the launch of Ardell Magnetic Gel Liner (£11.99, feelunique.com).

At first glance it looks like any other black gel liner. It comes in a small pot, with a liner brush for application, and you apply as normal, creating a simple line along the lash line of the upper lid, or more ornate winged, or cat’s eye designs if that’s more your thing. 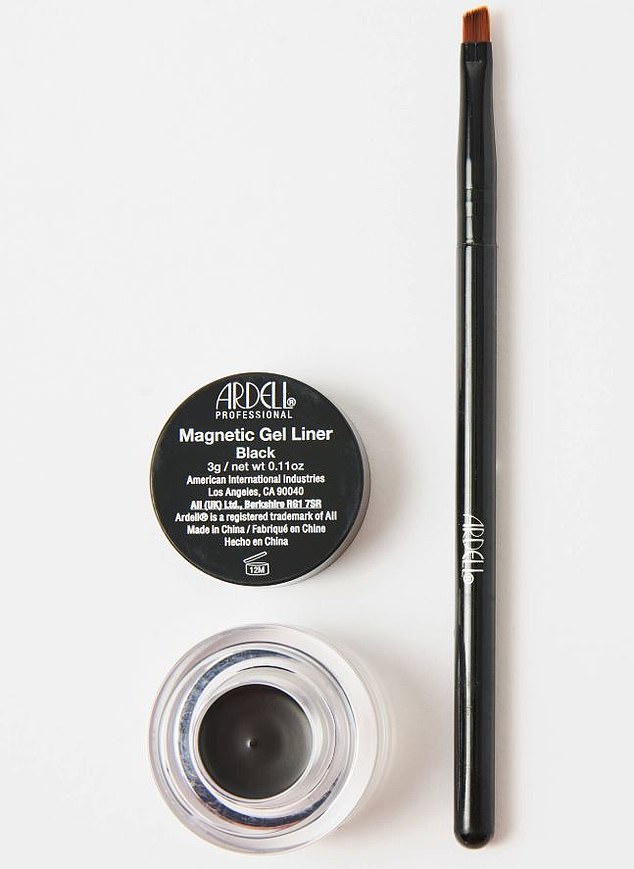 Ardell, which has been making false lashes for nearly 50 years, has brought them bang up to date with the launch of Ardell Magnetic Gel Liner (£11.99, feelunique.com)

After one coat has dried you apply another over the top, and when that’s dried, you’ve essentially coated a section of your eyelid with magnetic paint, which means pretty much anything magnetic that comes close to it will stick.

I tried it with Ardell’s magnetic lashes and managed to fix them easily in place.

I’m not particularly dextrous and found getting a neat line with the gel tricky, however, I also tried Eylure Pro Magnetic Eyeliner, which comes with its own lashes (£20, boots.com), and its more liquid formulation and thinner brush made it much easier to apply neatly, with the same results.

Both liners can be removed using an oil-based make-up remover.

The idea of using the power of a magnet to ‘lift away surface impurities and minimise the appearance of pores’ is appealing.

And according to the people behind Elf’s Beauty Shield Recharging Magnetic Mask (£30, elfcosmetics.co.uk) that’s exactly what magnetic face masks can do.

You apply the grey mask — a combination of iron powder, carrot seed oil, sunflower seed oil and argan oil — like any other face mask, leave for five to ten minutes, and then comes the fun bit. 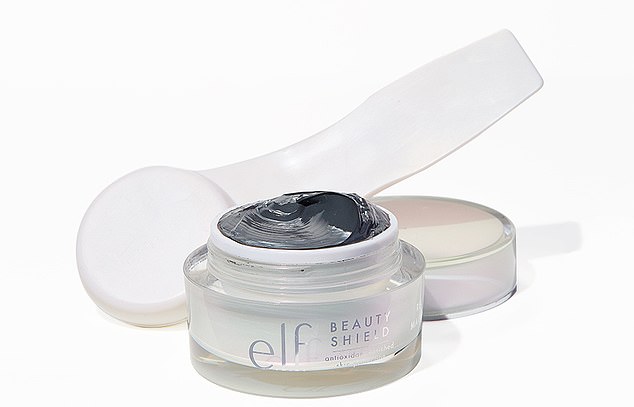 To remove it, you take the magnetic tool provided, hover it over your face, and watch as the mask jumps, in fragments, from your skin to the tool.

It’s great fun and looks super hi-tech. The magnet is designed to draw gunk out of your pores when it removes the mask.

Although the oils left my skin soft, my pores didn’t look any less noticeable afterwards.

My suspicion is you’d get a similar result using a wipe-off mask that contained the same seed oils — but where’s the fun in that?

MANICURE WITH A TOUCH OF MAGIC

If you cast your mind back to science classes at school and the sort of patterns you could make using different magnets and iron filings, the way that magnetic nail polish works won’t be a surprise.

While more commonly found in professional nail salons as an add-on for a gel manicure, there are also at-home kits such as the Rio Magnetic Magic Nail Polish set (£14.97, amazon.co.uk), which comprise magnets that can create certain designs when used with the special polish provided. (The magnets won’t work with ordinary nail polish.)

You prep the nail as normal and apply a base coat and the first colour coat that looks just like a sparkly nail polish. 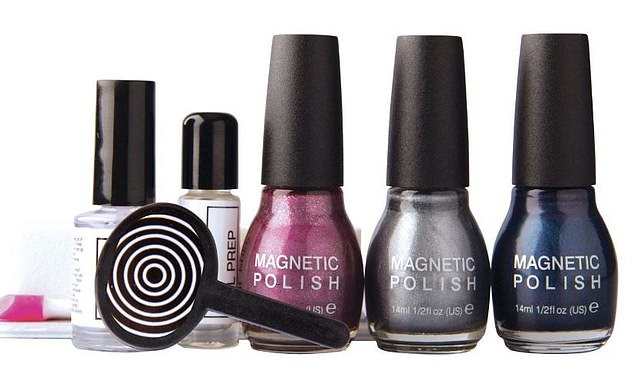 But it’s when you apply the second coat that the magic really happens.

The polish has to be wet so you can only do one nail at a time, but you hold your chosen magnet over, but not touching, the nail for 15 seconds (the longer you hold it, the more defined the pattern).

The magnet causes the metal particles in the polish to move in a specific way to create a design on the nail.

You have to wait until the polish is dry — they advise 60 minutes — before applying a top coat, to avoid smudging. It worked like a dream.

Although the process of doing the manicure took longer than usual, I was easily able to create elaborate circles and stripes that looked slick.

Designed to help make hair appear thicker, Nanogen Keratin Hair Fibres (from £18.95, nanogen.com) aren’t technically magnetic, they’re electrostatic, but they behave in a similar way to magnets because they can attract and repel each other.

Developed in conjunction with researchers in electrostatic science from the University of Southampton, the fibres, which are made from keratin, one of the proteins that make up human hair, come in a patented jar that has metal strips on the side and bottom of the pot to create an electrostatic charge when shaken. 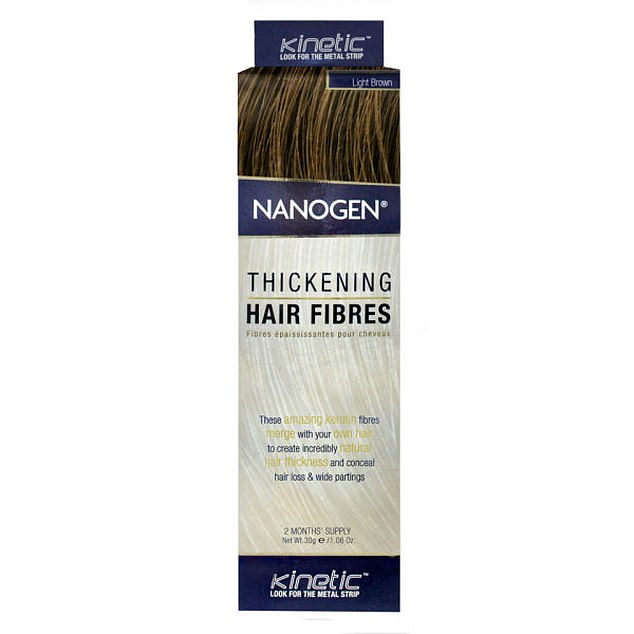 Cast your mind back to science lessons again (sorry) and you might recall discovering the hairs on your head are also charged — think about what happens when you take off a synthetic jumper.

So when you apply the fibres to your hair, the oppositely charged particles lock on to the hair shaft creating a hair that appears thicker.

They come in ten different shades and it’s child’s play to shake the pot and then sprinkle the fibres over your existing hair — perfect for thickening if your parting has become a little wider than you’d like, although they do need something to cling on to so won’t work on bald patches.

Much easier — and more natural looking — than coloured sprays, though the effect will only last until your next shampoo.