By Bryony Jewell For Mailonline

This is the moment a bungling burglar has to be rescued by firefighters after getting stuck on a third-floor window ledge.

Video shows construction worker Suhant B, 28, being helped down a ladder by two men in Bangalore, India.

Police sources say he probably climbed to the ledge to try and break in through the window on the early hours of February 23. 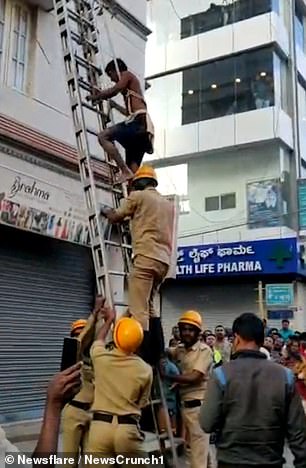 A bungling burglar had to be rescued by firefighters after he got stuck on a third-floor window ledge in Bagalore, India

Video filmed by someone on the ground shows the Suhant B crouching down and clinging to the side of the window as he looks towards the street for help.

Another clip shows two firefighters slowly assisting him down a ladder as a large crowd gather on the street to watch what is happening.

Suhant B appears to have a rope tied around him as he leaves the window-ledge but quickly slips it off after making it to floor-level.

After having a sip of water and a quick sit down, Suhant B is back on his feet and surrounded by the intrigued crowd.

The man, identified as Suhant B, is seen clinging to the window frame before being rescued 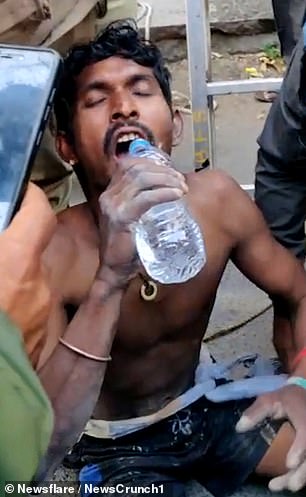 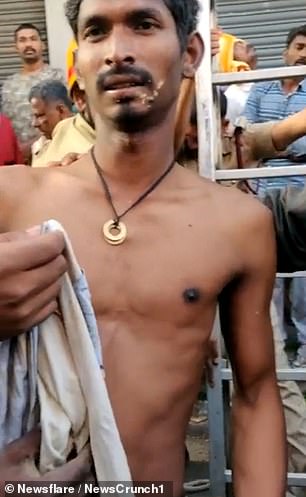 Firefighters were alerted to the scene after walkers spotted Suhat B and told the family who live inside the house. They called the police and fire brigade.

It is thought that he was unable to get into the home as the window was secured with a grill.

He then lost the nerve to climb down and called for help when he spotted people walking along the street below.

‘He is claiming he climbed to the third floor while fleeing from a drunken fight with his colleagues. We are probing all angles,’ said a police officer.