Brexit war is back: Boris Johnson tears up pledges of ‘level playing field’ with EU as he sets out vision for Canada-style trade deal despite Brussels already having rejected the idea

What happens next in Brexit trade wrangling?

Today: The UK’s negotiating proposals will be put before Parliament, after the EU signed off its mandate for Michel Barnier on Tuesday.

Monday: Talks on the trade deal are due to start in Brussels.

They will initially focus on the schedule for discussions – which in itself will be tricky. The EU wants to talk about fishing first, but the UK says it must be considered as part of a wider package.

July: This is theoretically the last point at which the transition period can be extended – although Boris Johnson has insisted he will not contemplate any delay.

January 1: The transition period is due to end and the UK will be on new trade arrangements with the EU. This will either be the trade deal or World Trade Organisation terms.

Boris Johnson will tear up commitments to a ‘level playing field’ with the EU today as he sets out his vision for a Canda-style trade deal.

The PM is unveiling the UK’s negotiating aims as tensions ramp up again between the two sides – just weeks after Brexit legally happened.

The mandate being published by the government this morning will stress Mr Johnson’s priority to secure ‘political and economic independence’ when the ‘standstill’ transition period ends on December 31.

Ignoring the provisions in the political declaration that was sealed along with the divorce deal, the document will reject calls for the UK to obey Brussels rules and standards.

However, the looming talks are shaping up to be bruising – with the EU’s Michel Barnier already having dismissed the idea of Canada-style terms, and warning there will be no agreement unless Britain limits competition and concedes on issues such as fishing rights.

Downing Street has angrily pointed out that other trade deals hammered out by the EU did not include the kind of ‘onerous commitments’ being demanded.

Mr Barnier’s mandate, published earlier this week, called for any agreement to use Brussels’ standards as ‘a reference point’ over time. 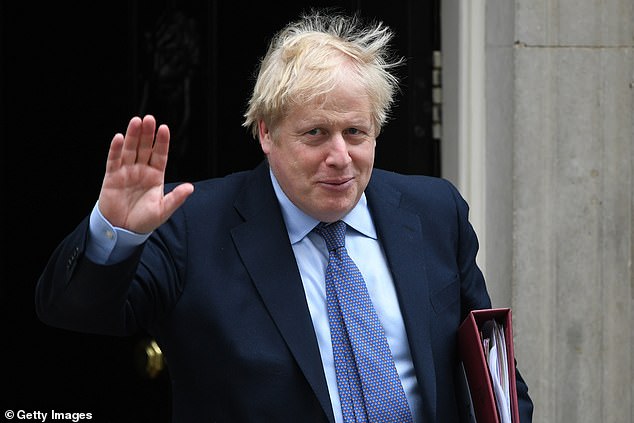 That suggested the UK would be expected to keep aligned with changes to the rules in future, something that would breach Mr Johnson’s red lines.

Mr Johnson signed the political declaration with the EU in 2019, which accepted there should be ‘robust commitments to ensure a level playing field’ on areas including state subsidies, workers’ rights and environmental standards.

The UK insists it wants an off-the-shelf free trade agreement, similar to that the EU struck with Canada.

This would mean shunning almost all tariffs and quotas, and potentially bolting on preferential access for financial services.

Crucially, it would not involve the UK aligning with EU rules or obeying legal edicts from the bloc’s judges.

However, Michel Barnier has said the Canada model is not appropriate as the UK is geographically closer to the EU and the competition issues are different.

He insists that there must be a ‘level playing field’ for trade, with the UK following Brussels’ standards.

The EU is determined to keep access to UK waters after December 31.

France is particularly keen to ensure that its fishermen have generous quotas when Britain leaves the EU Commons Fisheries arrangements.

But Boris Johnson has said: ‘British fishing grounds are first and foremost for British boats.’

Mr Johnson and Donald Trump have vowed to push for a quick Transatlantic trade deal.

However, the US is likely to demand concessions on better access to lucrative UK food markets in return for good terms in other areas.

The EU is trying to thwart the discussions by insisting the UK must stay tied to its food standards rules.

The EU negotiation mandate includes a stipulation Britain should ‘return unlawfully removed cultural objects to their countries of origin’.

The passage is thought to refer to the Elgin Marbles, ancient Greek sculptures taken to Britain more than 200 years ago and now on display in the British Museum.

Greece has been vocal about demanding the marble sculptures, once situated in the ancient Greek Parthenon temple, are returned to Athens.

Downing Street has insisted the future of the marbles is ‘not up for discussion as part of our trade negotiations’.

But Downing Street insiders made clear he believes the mandate he won at the general election trumps the declaration, which does not have the status of a binding international treaty.

In the Tory election manifesto, Mr Johnson promised ‘no political alignment’ with the EU, an end to the role of the European Court of Justice and ‘full control’ of the UK’s fishing waters.

Mr Barnier has insisted that fishing rights for EU vessels must be included in the deal or there ‘won’t be any agreement at all’.

A Downing Street source said: ‘The Prime Minister is working to a mandate which derives from his manifesto which set out very clear what he would be seeking in the negotiations, also set out what would not be acceptable to the UK, and that whatever happens at the end of this year, the UK will be regaining in full its political and economic independence.’

The UK’s mandate will be set out in Parliament by Brexit minister Michael Gove later.

On the eve of the UK setting out its red lines, Mr Barnier issued a fresh warning that the UK must accept common standards with the bloc if it wants continued preferential access to European markets.

He said he accepted assurances from Mr Johnson that he did not want to turn Britain into a de-regulated ‘Singapore-on-Thames’.

However, he said that without agreement on a series of common ‘ground rules,’ efforts to prevent unfair competition and to tackle climate change would be undermined.

Speaking to an ESCP business school seminar in Brussels, he said: ‘We are ready to offer to the UK super-preferential access to our markets – a level of access that would be unprecedented for a third country.

‘Is this something we can do without firm guarantees that the UK will respect the level playing field and avoid unfair competitive advantages? The answer, I’m afraid, is simple. We cannot.’

Mr Barnier said that whatever the outcome of the trade talks, there would be checks on goods entering the EU from Britain from the beginning of 2021 when the current transition period ends.

‘Of course we love ‘Made in Britain’ but we must guarantee that the goods we import from the UK – tariff and quota free – really are British.

‘We cannot take the risk that the UK becomes a kind of assembly hub for goods from all over the world, allowing them to enter the single market as British goods.’

Mr Barnier and the PM’s Europe adviser David Frost will meet in Brussels on Monday for the first round of talks on the post-Brexit relationship, with a further session expected in London later in March. 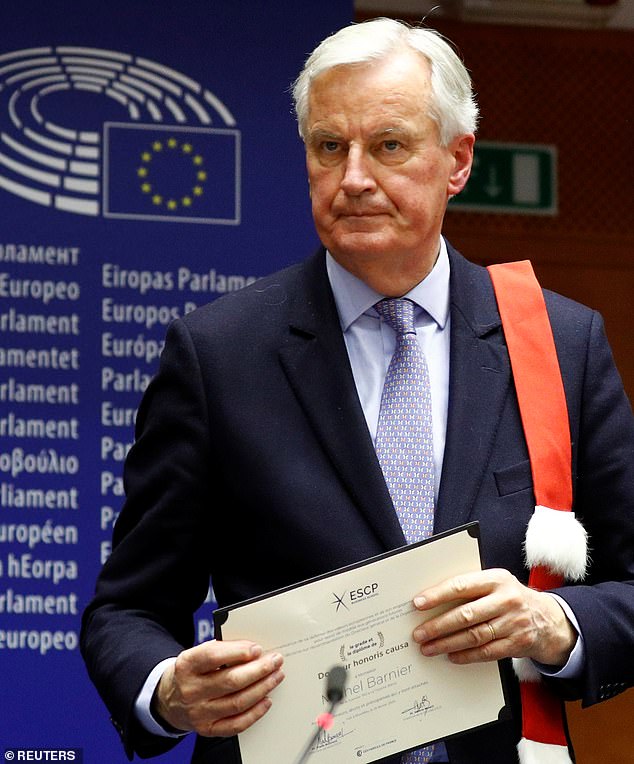