The sordid story of Harvey Weinstein has taught us many unsavoury truths about Hollywood, and about the kind of abuse that lurks behind those million-dollar smiles.

Never before have the workings of this tawdry world been laid bare in such excoriating detail. We have been spared nothing, from detailed descriptions of the ex-mogul’s apparently deformed anatomy to the acts themselves, each one more grotesque than the last.

In many ways it’s nothing new: sleazebags like Weinstein have always used their power to take advantage of beautiful young women. We shall perhaps never know how many he subjected to his callous games of fat cat and mouse in hotel suites across the world. 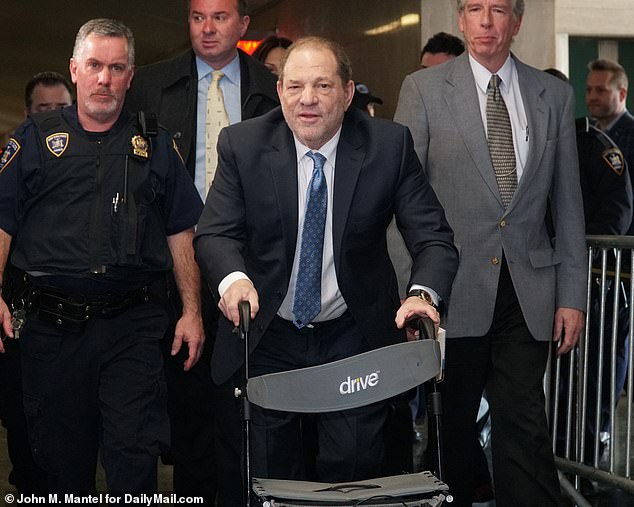 The sordid story of Harvey Weinstein (pictured at court in New York on Monday) has taught us many unsavoury truths about Hollywood… but there remains one aspect of this trial that has not been fully explored, writes Sarah Vine

Still, by testifying — at great emotional cost — the witnesses have not only secured a great personal victory but also (we must hope) helped safeguard future generations of women against this kind of abuse and exploitation.

But there remains one aspect of this trial that has not been fully explored. It formed the central plank of the defence case and remains, despite the guilty verdicts, a source of doubt for many.

Why, if Weinstein was a revolting abuser and rapist, did the victims continue to pursue relationships with him, in some cases even seeking out his company? Many have taken this to mean his victims in reality understood perfectly well the nature of their interactions with the big-shot producer. But the truth is far more complex.

Weinstein’s assaults were not random acts of opportunism, a drunken date gone wrong. He had a clear modus operandi. He was a serial abuser, and his targets were groomed over a period of time. 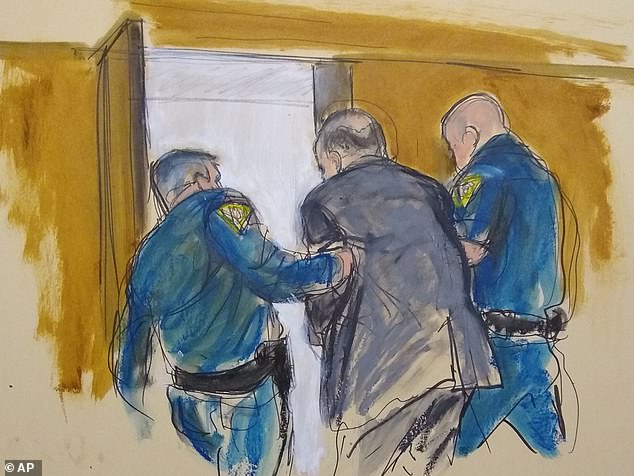 Why, if Weinstein (seen in a court sketch) was a revolting abuser and rapist, did the victims continue to pursue relationships with him, in some cases even seeking out his company? Many have taken this to mean his victims in reality understood perfectly well the nature of their interactions with the big-shot producer. But the truth is far more complex 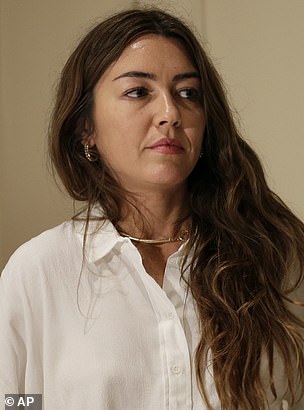 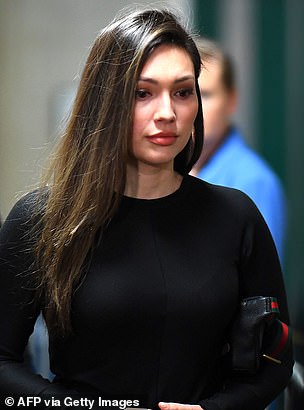 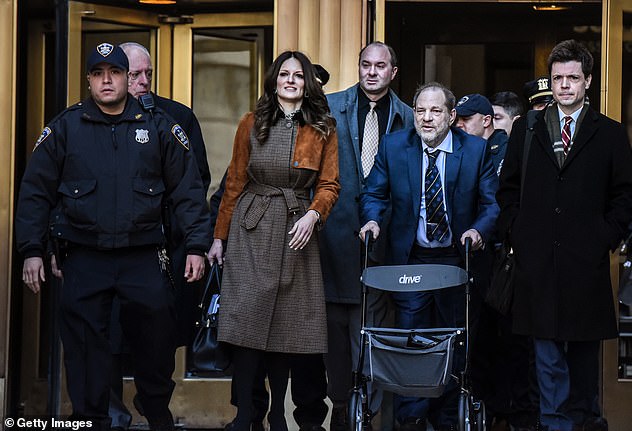 These were vulnerable women he was targeting, women for whom an audience with someone as powerful as Weinstein would have represented a rare opportunity. Of course they wanted to please him, yes, even after he had defiled them. And that is what I think will strike a chord with many women (he is pictured leaving court on February 14 with lawyer Donna Rotunno)

He would strike up a relationship, ostensibly professional, with his victims, before exercising coercion. He would gain their trust, make them feel valued, shower them with praise before making his move.

Like all skilled abusers he knew how to exploit the ambiguity of the situation to his advantage. He set out deliberately to manipulate and confuse their emotions.

Let’s face it, these were vulnerable women he was targeting, women for whom an audience with someone as powerful as Weinstein would have represented a rare opportunity. Of course they wanted to please him, yes, even after he had defiled them.

And that is what I think will strike a chord with many women.

I am not comparing for a minute our experiences with the horrors those witnesses faced. But how often in your life have you held your tongue or gone along with something that made you feel uncomfortable simply because you didn’t want to upset the people involved?

Time and again women’s fear of confrontation leaves us feeling awkward or compromised.

It is, I think, a feminine trait. Girls are programmed from a young age to want to please. In part it’s how society sees us: providers, enablers, helpers. But whatever the reasons, rightly or wrongly this constant underlying need for approval ultimately makes us vulnerable — especially when there are ruthless men like Weinstein on the prowl.

So, yes, I can really understand how a woman can, on the one hand, be violated and abused, yet, on the other, continue to seek the approval of her abuser. Time and again this happens in situations of family or domestic abuse. And I agree with the decision of that New York jury: it doesn’t mitigate the abuse. 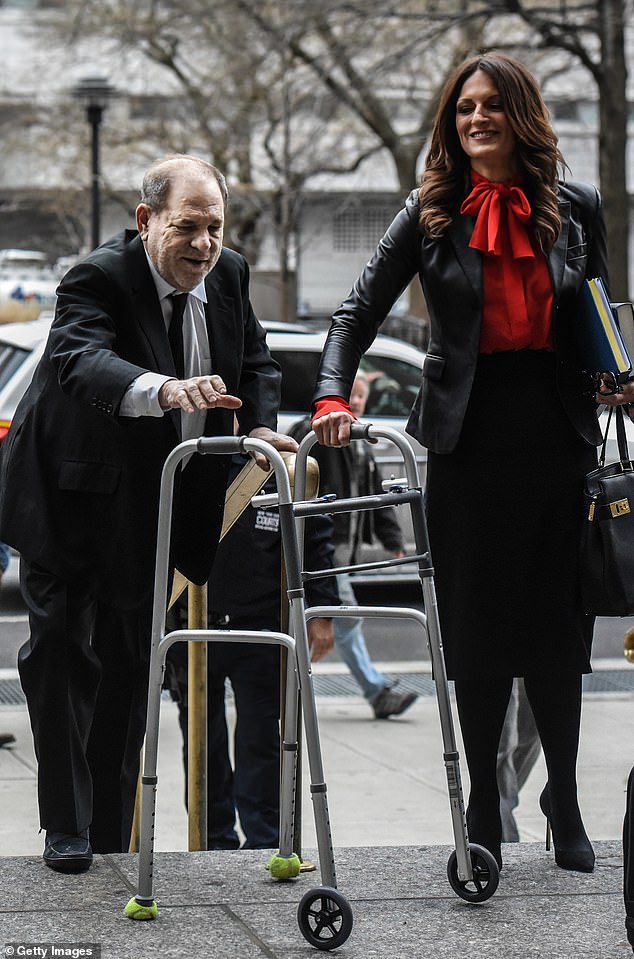 Weinstein’s assaults were not random acts of opportunism, a drunken date gone wrong. He had a clear modus operandi. He was a serial abuser, and his targets were groomed over a period of time (Weinstein is pictured with his lawyer Donna Rotunno)

There’s a very good reason why women behave this way. Because when we push back or challenge certain behaviours, we are immediately labelled as difficult.

Difficult in a man is a sign of strength. But a difficult woman, even in this day and age, is a whole other thing entirely. Strident, stubborn, harridan . . . mad or, worse still, menopausal. At the very least, deeply suspicious.

This verdict goes some way towards changing that. Thanks to the stubbornness and resilience of a group of extremely difficult women, a deeply unpleasant man has finally got his comeuppance.

The news that Burton’s biscuits in Blackpool is drafting in £30,000 of extra security to tackle gangs of children — some as young as eight — pilfering their products (which include Fig Rolls, Wagon Wheels and Jammie Dodgers) brought back a childhood memory of my own that’s haunted me for the best part of four decades.

It was the early Eighties, and my friends and I got wind of a new delivery of Penguins to the school canteen. Being the end of term, we figured no one would miss them — and so sneaked in and p-p-picked up a box. To our dismay, the Head found out — and the whole school was kept behind on the last day as punishment.

We never confessed, and were never discovered — but I’ve never been able to look a Penguin in the eye since.

Bit of a Catastrophe on the red carpet?

On the right, Kristin Scott Thomas, simple, understated lines in dazzling contrasting gold make her look both laid back yet glamorous.

By contrast, the black bin-liner onesie worn by Sharon Horgan (writer of the inspired comedy Catastrophe) is both impractical, creased and, I’ll wager, extremely uncomfortable. 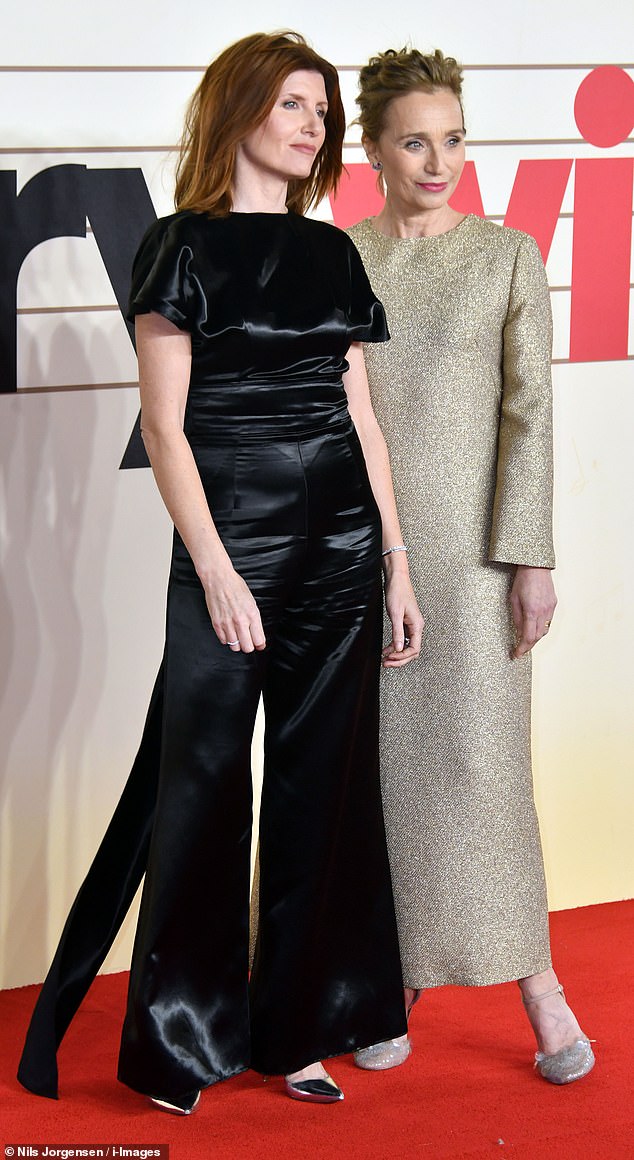 Kristin Scott Thomas looked laid back yet glamorous, while the black bin-liner onesie worn by Sharon Horgan at the Military Wives premiere is both impractical, creased and, I’ll wager, extremely uncomfortable

‘Coronavirus is an anagram of carnivorous’ screams PETA’s latest advert, adding that ‘contact with live animals or their flesh may be the source of the deadly virus’.

I’m all in favour of the humane treatment of animals — but taking advantage of the human suffering and rising death toll of this outbreak to promote PETA’s vegan agenda is, I’m afraid, grotesque.

He’s back! Scowling Storm Harry blew into Edinburgh last night, cap pulled down as he arrived back in the old country minus wife and son (will we ever see Archie again?).

I welcome the long overdue introduction of multi-skin-toned plasters at Tesco. But if we can match them to colouration, who are those blue ones for? The Smurfs?

It’s a long way from the delights of deepest winter in freezing Vancouver Island, though it’s not clear if he took a private jet as he often has before on jaunts around Europe and the U.S.

So why was he home? You guessed it! To attend a sustainable travel conference — thereby single-handedly proving the adage that satire really is dead.

Wonder if he’ll find time to pop in and see his dear old Granny while he’s here.

It was so thoughtful of the Indian government to honour the American First Lady Melania Trump’s cultural identity by presenting her with an orange flower garland that was the exact same colour as her face. 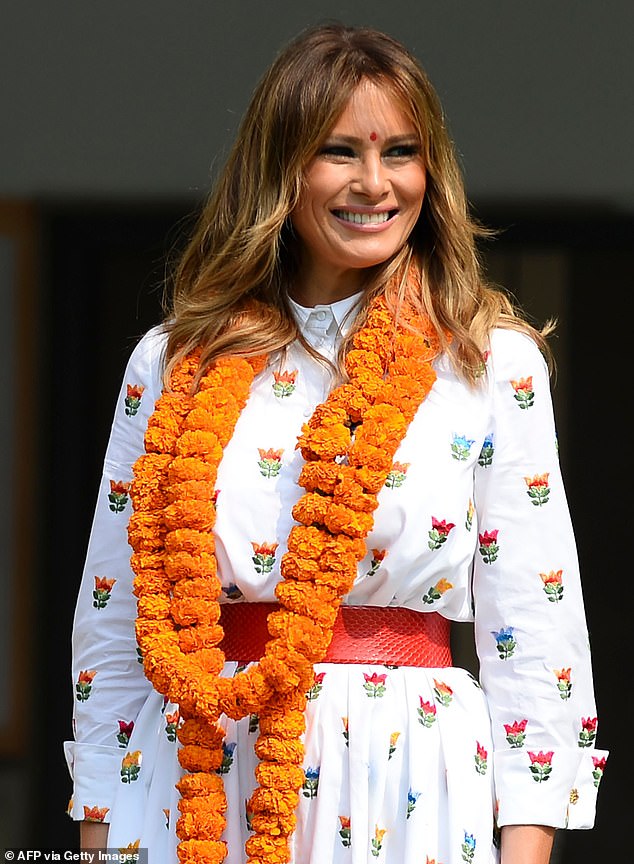 Melania Trump is seen during her visit at Sarvodaya Co-Ed Senior Secondary School, in New Delhi, India, on Tuesday

Thanks to a load of Lefties getting their knickers in a twist about the Chancellor drinking Yorkshire tea, I have discovered the very funny Yorkshire Tea Twitter-feed. No idea who runs it, but their sense of humour and good grace in the face of spittle-flecked vitriol and general derangement deserves a medal.

Even better was a message of solidarity from their counterpart at rival firm PG: ‘Just wanted you to know that I’m here for you. Message me if you wanna cuppa.’ If PG Tips can make peace with Yorkshire Tea, surely all is not yet lost.

Rejoice! Gwyneth Paltrow’s vagina-scented candle is back in stock at Goop. Yes, we really are living in a world where that kind of thing sells out. Whatever next? The bottled essence of Brad Pitt’s pits? On second thoughts . . .

One reason I’m so wary of the idea of scrapping the licence fee for the BBC is that, having grown up in Italy, I know what a world without good public service broadcasting looks like.

My favourite recent example of this is the brilliant BBC3 ‘mockumentary’ This Country, which started its third series last week. It stars brother and sister Charlie and Daisy May Cooper playing hapless cousins living in the Cotswolds. If you haven’t seen it, do give it a try.

It’s witty, quirky, dark and hilarious. In other words, precisely the sort of thing that wouldn’t stand a chance without the BBC.