A spy who attempted to kill a Bulgarian arms dealer is a Russian diplomat linked to the poisonings of Sergei Skripal and his daughter, a new report has alleged.

Bulgarian prosecutors charged three Russians last month with trying to kill arms factory owner and trader Emilian Gebrev and two other Bulgarians in Sofia between April 28 and May 4, 2015 by ‘intoxication with an unidentified organophosphorus substance,’ the prosecutors said in a statement.

One of the three alleged men called Georgy Gorkshov, is actually Yegor Gordienko, a Russian diplomat, it has been claimed.

After two failed attempts to kill Mr Gebrev he was understood to have became a third secretary at Russia’s mission to the World Trade Organisation in Switzerland, Bellingcat claimed yesterday.

It has been reported that the 41-year-old may have supported GRU officers in Europe, such as Anatoly Chepiga and Alexander Miskin, who were charged with attempted murder in September 2018 after the poisoning of Mr Skripal and his daughter in March the same year.

The three suspects have been identified as Sergei Pavlov, Sergei Fedotov, and Georgy Gorshkov, and are believed to be residents of Moscow, the prosecutor´s office said in a statement earlier this week.

Last month, prosecutors announced charges against three Russians for the same case but did not identify them. 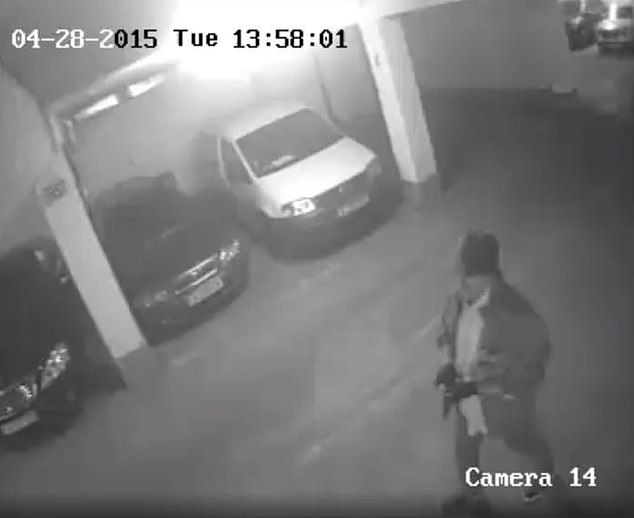 The suspected GRU agent allegedly involved in the Gebrev poisoning

The investigation into the poisoning was reopened in 2018 after Gebrev told prosecutors he had reason to believe the substance used on him might have been similar to Novichok, the nerve agent used against Skripal in Salisbury in England.

In February last year, Bulgaria said it was investigating a possible link between their poisoning and the attack on Skripal and his daughter, both of whom survived.

At the time, prosecutors said a Russian man by the name of Sergei Fedotov visited Bulgaria three times in 2015 and was there in April when Gebrev was poisoned. 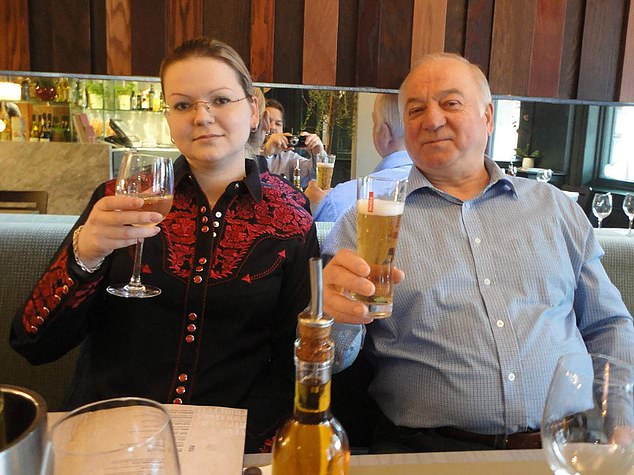 In October 2018, Russian news website Fontanka named Fedotov, who it said worked for the country’s GRU military intelligence service, as a suspect in the Skripal case.

Investigative website Bellingcat previously named Denis Sergeev, who used the alias Sergei Fedotov, as a 45-year-old member of the GRU who arrived in Britain on the same day as the two suspected attackers, 48 hours before the poisoning which happened on March 4, 2018.

New information suggests he took on a ‘supervising, coordinating role’ in the attack, the website said following investigations alongside the BBC.

Sources told the BBC’s Newsnight programme that Sergeev holds the rank of major general in the Russian military intelligence service.

Moscow never comments on the identity of GRU staff, but has denied involvement in the poisoning of Skripal. 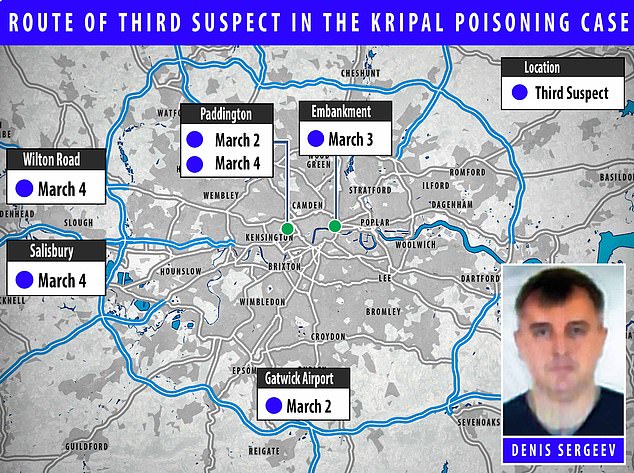 Denis Sergeev, the third suspect (inset), has his movements across London shown last year: March 2: Gatwick to Paddington. March 3: Embankment Station to Salisbury. March 4: Paddington to Salisbury and then the Skripal’s home (Wilton Road) before flying back to Moscow 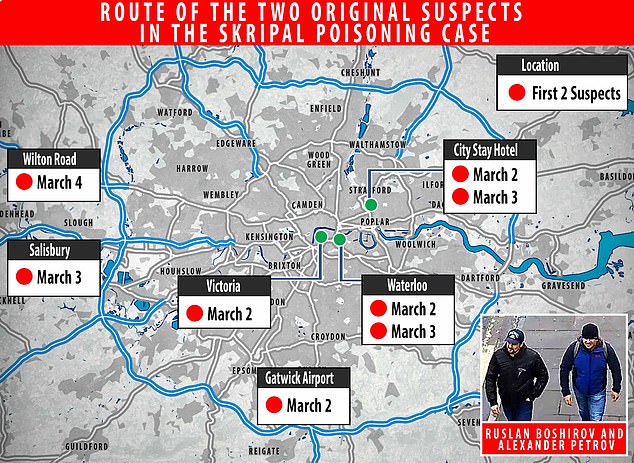 The movements of the original two suspects Ruslan Boshirov and Alexander Petrov (inset): RED, first two suspects – March 2: Gatwick, to Victoria, then Waterloo and on to the City Stay Hotel. March 3: Waterloo, to City Stay, to Salisbury. March 4: Skripals’ home (Wilton Road), leave on a flight to Moscow.

A Russian Foreign Ministry spokeswoman declined to give detailed comment on Thursday but said the Russian embassy in Bulgaria was probably following developments.

In December, Sotir Tsatsarov, at the time Bulgaria’s chief prosecutor, said he saw a close link between the people involved in the crimes in Bulgaria and England as a suspect in the Skripal case was in Sofia when Gebrev was poisoned.

Who is the ‘third man’ and what was his role in the Russian military?

Denis Sergeev is a graduate of an elite military academy in Moscow that churns out top intelligence officers.

The 45-year-old is thought to have left the UK on the same day as the nerve agent attack on former double-agent Sergei Skripal and his daughter Yulia in Salisbury.

He was also linked to the botched poisoning of an arms dealer in Bulgaria in 2015. And he is said to have been the boss of several sham companies and connected to a Russian bank loan of more than $1million. 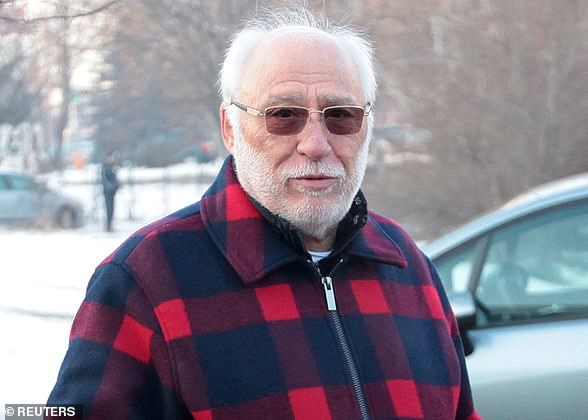 Sergeev was also in Bulgaria in April 2015 when the Bulgarian arms manufacturer Emilian Gebrev (pictured) collapsed in Sofia after mysteriously being poisoned, it was claimed

Sergeev’s true identity and details of his movements were revealed by investigative website Bellingcat.

Using the cover name Sergey Fedotov, he arrived at Heathrow on March 2 last year hours before Alexander Mishkin and Anatoly Chepiga – the two lead suspects in the Salisbury poisoning.

All three are thought to serve in the Russian military intelligence service, the GRU.

Sergeev was checked-in on a Heathrow flight to Russia on March 4 – the day the Skripals were found collapsed on a bench in Salisbury – but instead aborted his travel plans and made his way to Moscow via Rome.