By Jason Groves for the Daily Mail

Boris Johnson last night warned Brussels he will never surrender Britain’s fishing grounds to the EU, as talks on a post-Brexit trade deal got off to an acrimonious start.

In its new ‘negotiating mandate’ yesterday, the EU made a series of demands which were immediately rejected by Downing Street.

These included a requirement for the UK to continue following Brussels rules, a ban on the UK negotiating a US trade deal that allowed in chlorinated chicken, and an insistence that EU fishing boats should retain their existing quotas in British waters.

The EU’s chief negotiator Michel Barnier said that without a deal on fish ‘there won’t be any agreement at all’. 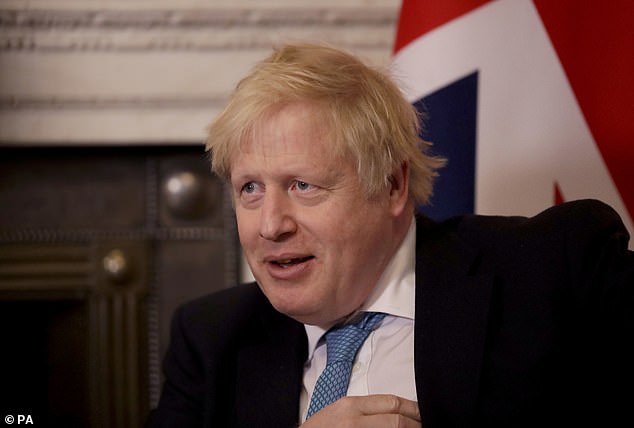 Boris Johnson last night warned Brussels he will never surrender Britain’s fishing grounds to the EU, as talks on a post-Brexit trade deal got off to an acrimonious start (pictured at Downing Street on Tuesday)

Launching the EU’s demands in Brussels, Mr Barnier said: ‘Fisheries is part of a package as regards our trade relations, which are to be discussed, and that package is one you can’t break up. There will be no ambiguity at all around that.

‘The trade agreement will be associated with a fisheries agreement and an agreement about a level playing field or there won’t be any agreement at all.’

But Downing Street said the Prime Minister would never sacrifice the UK’s fishing grounds – and suggested that access for EU trawlers would have to be negotiated separately from trade.

The PM’s official spokesman said: ‘The UK did not vote twice to take back control of its fishing waters only to give that control up again. It doesn’t matter what the EU puts in its negotiating mandate as we will become an independent coastal state at the end of this year.

‘This does not need to be negotiated, nor will it be. Any access by non-UK vessels to fish in UK waters will be for us to determine.’ No 10 also rejected the EU’s demand that Britain signs up to a ‘level playing field’ in which the UK agrees to abide by EU rules on issues like state aid and workers’ rights.

The PM’s spokesman said: ‘We have been very clear on our commitment to discuss open and fair competition as part of negotiations, but we will not accept any demands for the UK to follow EU rules, just as we would not expect the EU to accept UK laws. 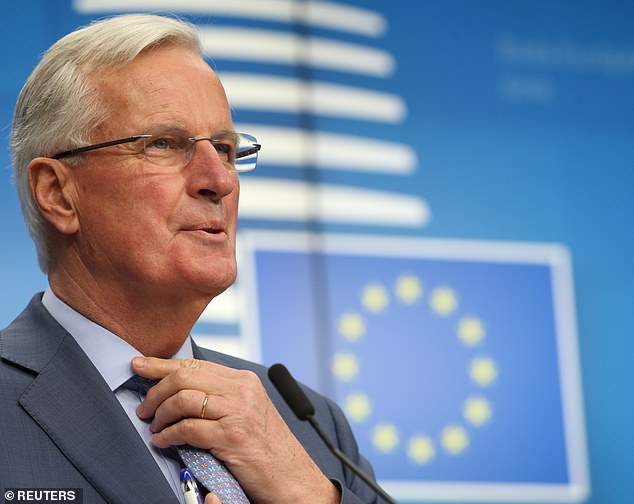 The EU’s chief negotiator Michel Barnier said that without a deal on fish ‘there won’t be any agreement at all’ (pictured: Mr Barnier speaking at a press conference yesterday)

‘We do not agree that an open trading relationship based on a free-trade agreement requires extensive level playing field commitments.’

Members of Mr Johnson’s Brexit ‘war cabinet’ met yesterday to sign off the UK’s own negotiating blueprint for talks that will begin in Brussels on Monday.

Details will be published tomorrow, but sources said the document focuses on securing a Canada-style free trade agreement with no alignment with EU rules after the transition period finishes at the end of this year.

No 10 said this week that the PM’s ‘priority’ is to ‘take back control’ of the UK’s borders and laws by the end of the year, even if this means there is no agreement on trade.

Mr Barnier accused the UK of backtracking on parts of the Brexit deal relating to Northern Ireland. He said he had been ‘astonished’ by statements from Northern Ireland Secretary Brandon Lewis suggesting there would be ‘unfettered’ trade across the Irish Sea.

And he urged Mr Lewis to ‘take time and read the Withdrawal Agreement’ signed by the two sides last year. 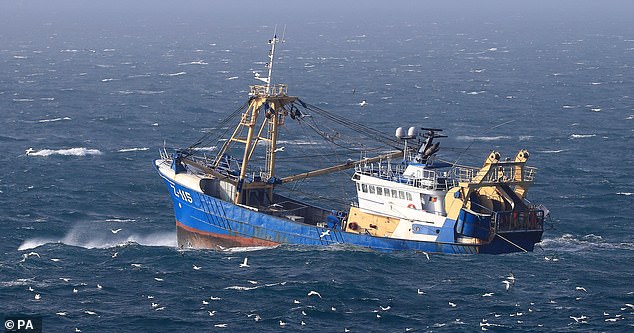 Brussels has insisted that new checks will be needed on goods travelling between Great Britain and Northern Ireland as part of the deal.

But No 10 sources yesterday said there were ‘no plans’ to create new infrastructure to conduct any checks. Mr Barnier yesterday insisted that the UK had agreed to compete on a ‘level playing field’ under the terms of a political declaration that accompanied the Brexit deal.

But No 10 said countries like Canada and South Korea had not been expected to sign up to EU rules in return for trade deals. The spokesman also pointed out that Brussels has dropped parts of the joint political declaration.

Meanwhile, the National Farmers Union yesterday warned the PM against signing a trade deal with the US that would lower animal welfare standards by allowing in products like chlorinated chicken and hormone-treated beef.

NFU president Minette Batters said: ‘To sign up to a trade deal which results in opening our shelves and fridges to food which would be illegal to produce here would not only be morally bankrupt, it would be the work of the insane.’