Coronavirus fears have been raised on board a new cruise ship after it was blocked from docking in Jamaica because a member of its crew was sick.

The MSC Meraviglia, which is carrying more than 4,500 passengers and 1,600 crew from Miami, was barred from making port in Ocho Rios on Tuesday when officials discovered that a member of the crew was in isolation with flu-like symptoms.

Health minister Chris Tufton said the decision was taken because the person had a fever, cough, muscle pains and had been to a ‘country of interest’ linked with coronavirus.

The ship is now headed for Georgetown, the capital of the Cayman Islands, where health authorities have already said it will not be able to dock.

It comes after cruise ship MS Westerdam was rejected from five ports earlier this month amid fears over coronavirus, and after an outbreak of the disease on the Diamond Princess ship which sickened more than 600 and killed four. 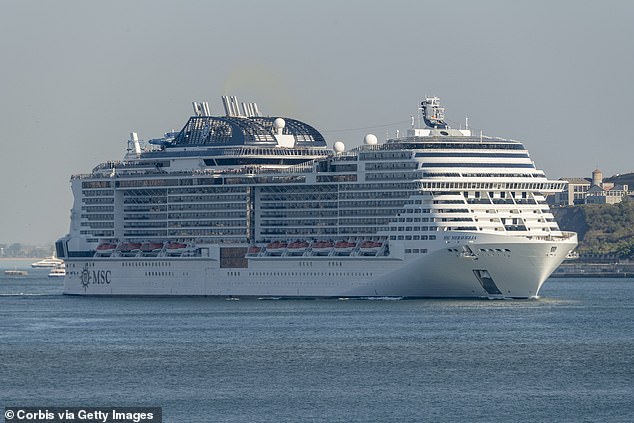 The MSC Meraviglia cruise ship was turned away from port in Ocho Rios, Jamaica, on Tuesday and has already been told it cannot dock in the Cayman Islands over coronavirus fears (file) 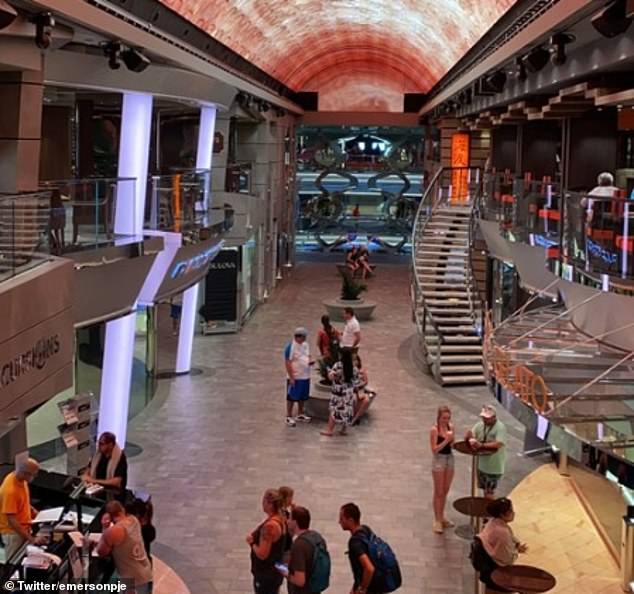 It comes after a member of the crew from the Philippines was quarantined after suffering flu-like symptoms, though MSC insists that there is no coronavirus on board

It is unclear what will become of the Meraviglia, which departed from Miami on Sunday and was due to cruise around the Caribbean for a week.

MSC said that the crew member in question had boarded the ship in Miami on Sunday after travelling from Manila, in the Philippines, via the Turkish city of Istanbul.

All passengers and crew passed health checks before being allowed to depart.

The crew member reported to the on-board medical station at some point between Sunday and the ship’s arrival in Ocho Rios on Tuesday.

The cruise line said the person has tested positive for Type A influenza, rather than coronavirus, and has been placed in quarantine.

Still, Jamaica and the Cayman Islands were taking no chances.

Online records show that the ship arrived in Ocho Rios around 8.20am local time on Tuesday. It then remained held in port until 1.20pm, when it departed.

While still on its way to the Cayman Islands, where it was due to arrive on Wednesday morning, health authorities confirmed it will also not be granted access to the port.

Dwayne Seymour, health minister for the Cayman Islands, said: ‘In an abundance of caution… the government has denied permission for the cruise ship to call on Grand Cayman as previously scheduled.’ 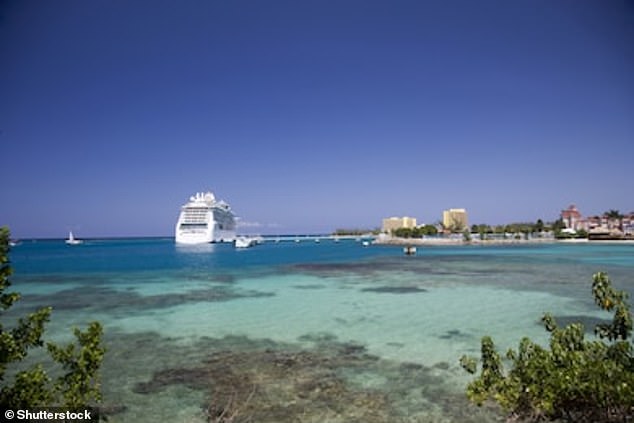 Passengers had been due to spend the day in Ocho Rios before being barred from coming ashore. The ship is due to call in Mexico before going back to Miami 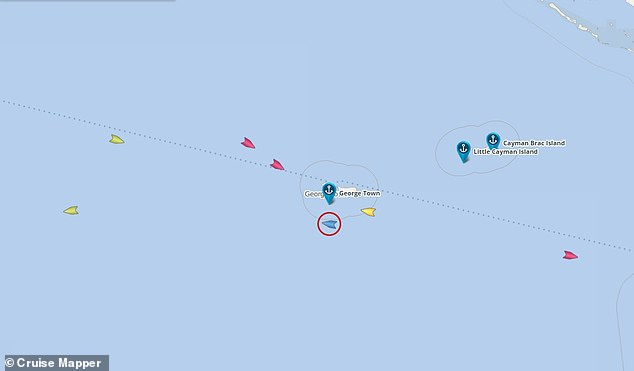 The ship’s next port of call after the Cayman Islands was due to be Cozumel, in Mexico, before a stop at on a private island in the Bahamas.

It was then due to return to Miami on March 1.

One passenger said that bottles of hand sanitizer had been placed around the ship for people to use, and that people were being encouraged to clean their hands before and after eating.

Photos posted by other passengers on board showed that people had been allowed to roam freely around the deck.

News about the Meraviglia broke as Indonesia announced it was evacuating 1,800 cruise ship staff from on board the World Dream cruise ship, where they have been stranded since February 9.

The ship had been denied entry in Thailand after it was revealed that three Chinese nationals who had taken part in an earlier cruise had tested positive for coronavirus.

The vessel was eventually allowed to dock in Hong Kong and passengers allowed off, but the crew were told to remain behind.

Medical boats have now been sent to evacuate the staff members, who may be quarantined for a further 28 days. 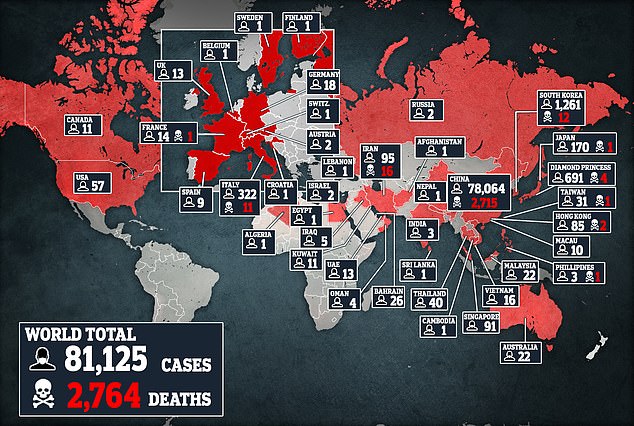 Coronavirus has infected more than 80,000 people worldwide and killed more than 2,700, with new outbreaks reported this week in South Korea, Iran and Italy

They would be taken to an uninhabited island with ‘good facilities’ in the Java Sea north of Jakarta for observation, he said.

‘We will observe them according to procedures set by the WHO (World Health Organization),’ he said.

Indonesia announced plans last week to bring back 74 of its nationals from the Diamond Princess cruise ship that has been affected by a coronavirus outbreak.

Indonesia’s health minister, Terawan Agus Putranto, told reporters on Monday that the government was still negotiating with the Japanese government on the best way to evacuate the Indonesians.

Separately, Indonesian authorities were investigating a report that a Japanese citizen had tested positive for the coronavirus after traveling to the Southeast Asian country earlier this month.

Meanwhile tourists at a hotel in Tenerife have also been qaurantined after four people from Italy, the centre of a new European outbreak, tested positive.

Hundreds of guests including Britons remain in limbo today with the hotel in quarantine and holidaymakers confined to their bedrooms.

Canary Islands president Angel Victor Torres announced last night that the tourists would have to remain in the H10 Costa Adeje Palace until further notice.

Italy now has 322 confirmed cases of coronavirus and 11 people have died, with towns in the north placed on lockdown to try and contain the spread. 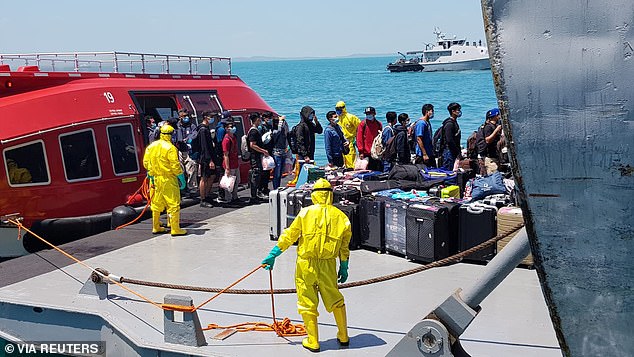 Idonesia has began evacuating some 1,800 crew from the World Dream cruise ship in Hong Kong, where they have been stuck since February 9 amid fears of a coronavirus infection 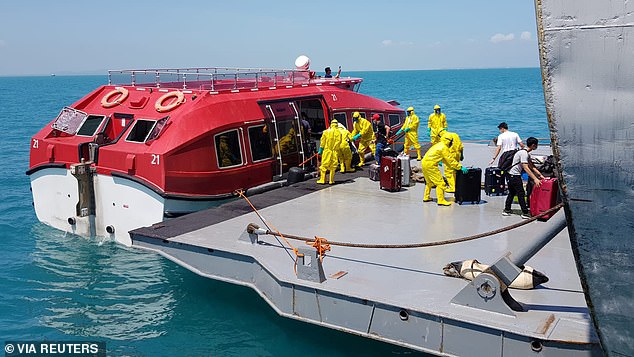 The disease has also skipped across the border to Croatia, Switzerland and Austria – all of which confirmed their first cases in patients linked to Italy.

Mainland Spain also reported two cases in Barcelona and Madrid in patients who had recently travelled to northern Italy.

Globally, coronavirus has infected more than 81,000 people and killed 2,700 amid warnings that it could soon become a global pandemic.

Bruce Aylward, who leads the joint WHO-China mission of experts, has warned that world leaders are ‘simply not ready’ to deal with outbreaks and have been given a false sense of security thanks to Beijing’s handling of the infection.

He said: ‘You have to be ready to manage this at a larger scale… and it has to be done fast,’ insisting countries have to ‘be ready as if this hits us tomorrow’.

Dozens of countries are now battling outbreaks, with South Korea, Italy, Japan and Iran among the worst-affected.