By James Wood For Mailonline

This is the remarkable moment disgruntled builders return rubbish dumped on their construction site to a couple whose address they found in the discarded waste.

Video shows a large pile of rubbish left by fly-tippers on the builders’ recently cleared chalk pit site including a microwave, cables and bin bags.

But after a quick search, one of the builders exclaims that he’s tracked down a couple whose rubbish is contained within the detritus.

And so he and his fellow construction workers decide to return the dumped waste to an address in Blandford Forum, Dorset – located on one of the discarded letters.

In the mobile phone footage, one of the builder’s describes their journey to return the rubbish.

He explains how he and his fellow builders were going to dump the waste in the couple’s front garden but as a result of ‘too much traffic’ they opted for the back.

‘There’s a lot of council house chav motors here so we’re going to have to go for the back garden,’ he says.

After which the builder proceeds to dump all the rubbish in the couple’s back garden – leaving it in a pile on their pavement. 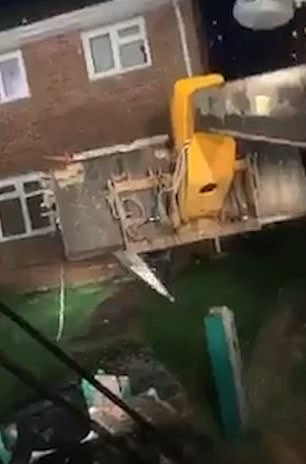 Video shows a large pile of rubbish left by fly-tippers on the builders’ recently cleared chalk pit site including a microwave, cables and bin bags (left). So they decide to return it to an address found within the discarded waste (right)

Dozens have commented on the footage since it was shared on a Facebook page earlier this week.

Some defended the actions of the builders’, with one saying: ‘I would do the same if it was dumped on my land.’

And another added: ‘Well done pal, should have put it through the window.’

Others defended the couple however, saying they might have paid for a firm to remove the rubbish – who later illegally dumped the waste.

One said: ‘They might have paid good money for someone to dispose of it.’

While another said: ‘That’s why you should make sure it’s a legit firm. Law can come after you if you let a fly tipper take your stuff.’